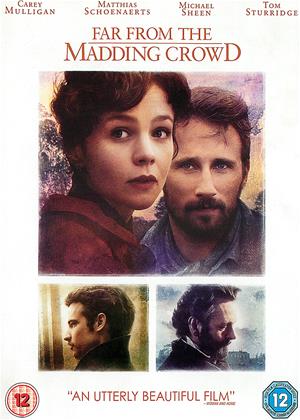 Reviews (2) of Far from the Madding Crowd

Cary Mulligan is one of my favourite Brit actresses so I was looking forward to this latest screen version of Thomas Hardy's classic novel. But unfortunately I'm a bit disappointed...

'Far from the Madding Crowd' has been filmed several times; perhaps the best known is the 1967 version directed by John Schlesinger with Julie Christie in the lead role as Bathsheba Everdene, Alan Bates as the loyal Gabriel Oak, Terence Stamp as the dastardly Frank Troy and Peter Finch as lonely gentleman farmer William Boldwood. Julie Christie is an iconic 1960s actress and made few concessions to period drama and played Bathsheba as a somewhat flirty, girlish woman complete with 1960s eye makeup.

So, does Cary Mulligan appear more authentic? In a word, no - this time there is more than a hint of modern day feminism about Bathsheba, something that would have been unheard of at the time. There feels something 'wrong' with all the characters - Tom Sturridge as Frank Troy never comes across as tempting enough to snatch Bathsheba's hand, Matthias Schoenaerts as Gabriel Oak seems too stolid and Germanic (yes, I know he's Belgian...) and as for Michael Sheen as William Boldwood, I can never rid myself of the image of him playing Tony Blair in 'The Queen'...

Of the variants of Hardy's tale that I have seen, the 1998 Granada TV film with Paloma Baeza comes closest to the book and is long enough at over 3¼ hours to have details that are missed particularly in the 2015 version which is under 2 hours, for example Sgt Troy waiting at the church for Fanny Robin. The 1967 version is over 2¾ hours.

Of the versions, my preference is for the 1967 one. Yes, it has its faults, but it has that amazing score, it has 'proper' swordplay by Frank Troy against the background of Maiden Castle - and it has Julie Christie. My second preference is for the 1998 TV film - if you've not seen it, it's well worth seeking out. And third is the 2015 Cary Mulligan version. It's not bad - in fact it's good - it's just that it pales in comparison to the others. Sorry, Carey - I can only give you 3/5 stars.

[Aside 1: also released in 2015 is a digitally remastered version of the 1967 film. Unfortunately it's still censored and the cock-fighting scene is still missing. However, this is present in full (together with the Overture and Entr'acte music) on the US Region 1 Warner Home Video DVD. Note also that in the 2015 version Frank Troy gambles on bare-knuckle boxing rather than cock-fighting]

[Aside 2: if you like the song 'Let no man steal your thyme' sung by Carey Mulligan, check out the version by Jacqui McShee on the 1968 album 'The Pentangle' by err, Pentangle]

I totally agree with everything RP has said. The film was too short and the characters, especially Mr Boldwood and Sergeant Troy failed to l live up to expectation. I disagree with the Gabriel Oak character. To me he was the best person in the film. The main thing missing was any passion. In the 1967 film Bathsheba show real pain when Troy kisses his dead girlfriend. This was totally missing from the 2015 version. It was missing again in the shooting of Troy; both from Cary Mulligan and Michael Sheen.