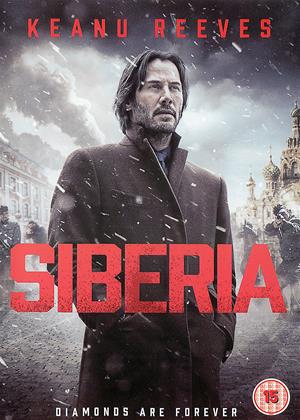 Save the electric - Siberia review by NC

John Wick is boring enough, despite the hundreds of shootings. This is just something that never really gets going.

It feels good to say that Keanu Reeves has made a big return with having found a cunning action nook as John Wick. He’s proven that he has just the right amount of range to be an action star worth watching. And as such a star, something as dreary as Siberia seems as though it should be beneath him. Having gotten his spark back, Reeves comes off here less as a struggling actor and more of an action icon trying to find another fit. And Siberia is far too constricting.

Consider the character he plays as diamond merchant Lucas Hill. He’s on business in Russia trying to sell blue diamonds of a mysterious nature. But the deals are not going well. There is much questioning of the material, where the buyers are starting to grow suspicious of the diamonds being fake. Many phone calls are made and transactions start to grow intense. Or about as intense as this cold and quiet noir can be until a gunfight finally closes out the picture.

Further complicating Lucas’ deals are his sexual affairs with are as messy as they are erotic. In the small town of Mirny, he befriends cafe owner Katya (Ana Ularu) and the two soon form a sexual relationship. Don’t worry, it’s consensual, to point of Katya literally asking openly and civilly if Lucas will sleep with her. How formal. Truth be told, most of the film goes rather formal and dry through its theatrics of corrupt deals and the politics of the diamond trade. Even moments where Reeves is seething with anger from being screwed over with a deal, he seems far too sedated. Where’s that raging Wick character gone to? Did somebody slip tranquilizers in his coffee?

Maybe Reeves decided not to bring his whole A game and I can’t say I blame him. The film just doesn’t give him much to do but go through the same motions. He quietly bickers with traders. Then he has a passionate sex scene. And in one of the most awkward of scenes he talks trade while getting into a group sex session. While there’s undeniably an erotic angle here, many of these scenes come off clinical the way characters plan out their sex. Lucas’ business shagging comes with instruction laid out in English and Russian and even Katya flat-out asks Lucas to do her like he does his wife.

While it was neat to see Reeves try out some Russian, his cold trip into murky noir waters does little to showcase his best efforts. Kudos to the man for putting his best foot forward in a film that tries to build him up front and center as a man who handles diamonds and women. Siberia, unfortunately, comes off as just as much a thriller knock-off as the diamonds Lucas is hocking. You’re better off watching John Wick again. I know that’s all I was thinking while watching.