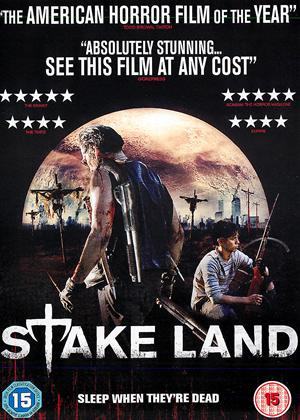 Road movie with vampires. Of its genre, it's rather good - well worth a watch - Stake Land review by RP

It's an American 'road' movie. That means (of course) that it's clichéd - experienced older man, takes naïve young man under his wing and teaches him how to survive as they travel together toward some distant goal, having assorted adventures and avoiding hazards on the way. In 'Stake Land' vampires and religious fanatics provide the hazards and the distant goal is 'New Eden', a semi-mythical vampire-free land. Err, that's it.

I had recently seen director Jim Mickle's earlier film 'Mulberry Street' (re-titled as 'Zombie Virus on Mulberry Street' for its UK DVD release) and Mr Mickle again does a good job as both director and co-writer, with Nick Damici as co-writer and filling the 'experienced older man' role (referred to only as 'Mister') and Connor Paolo as the young man who is taught how to fight vampires. Kelly McGillis plays an older woman - a nun, referred to only as 'Sister' - they rescue on the road. I hadn't seen her for years, not since 'Top Gun' and 'Witness'. The director's sister, Beth Mickle gets a nod as Production Design Consultant - she went on to do the production design for 'Drive'. The budget for 'Stake Land' is reported to be $650k, so the director must have attracted funding well up from the miniscule $60k of 'Mulberry Street'!

There are a few nice touches - the town sign for Pottstown, Pennsylvania, at the beginning is the director's hometown. There is the necessary gore and the minor shocks expected in a vampire film but it's not overdone and while the film is clichéd the direction, the photography and acting are good. Of its genre, it's rather good and I enjoyed it.

4/5 stars, although that does seem a little generous. Well worth a watch.

Stake Land is an American indie-post apocalyptic-vampire-road movie. In America in what appears to be the present day vampires have risen and are attacking the human race, leaving them split and sparely spread. A teenage boy, Martin (Connor Paolo) is orphaned after a vampire attack kills his entire family, whilst he is rescued by a brave stranger who kills the vampires. The stranger, known only as Mister (Nick Damici) promises to take on Martin and keep him safe. The film proceeds to follow them as they cross from the Southern states ofAmerica, north towards “New Eden”, a safe part of the country seemingly untouched by vampires.

As they travel the men pick up a nun, a pregnant young woman and an ex marine, all of whom must fight to survive against the vampires they encounter on their journey. The pair also find themselves crossing paths with the Brotherhood, a violent and savage religious sect that believe the vampires were sent as a plague of punishment by God. The leader of the Brotherhood, Jebedia Loven also haunts the group on their passage across America.

Stake Land takes a really interesting twist on the normally zombie-esque post apocalypse movie, whilst much of the other traits of the genre are the same, the decision to use vampires rather than zombies or the *infected* of Brit movie 28 Days Later the film explores many of the tropes of it’s own, slightly different, genre whilst adding some interesting sub-plots and overtones along the way.

Visually the film bares the mark of its limited budget, the prosthetics for the vampires look quite over dramatic and the camera work is not perfect, yet this all adds to the films charm. It is a staple of the indie-horror diet with a distinctly classic and cult feel to it.