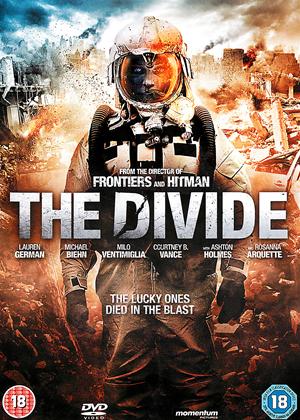 Synopsis:
When a cataclysmic explosion devastates New York, eight strangers take refuge in the basement of their apartment building, a converted fallout shelter. The shelter suddenly comes under attack by men in hazmat suits forcing the strangers to join forces in a desperate bid to take on the new enemy. Amid the chaos there is no real understanding of what these men are looking for and what drives them to be so merciless. Their sanctuary becomes a living hell where the survivors must use their wits to save themselves from becoming victims of the pack in a thrilling and gut wrenching finale.
Actors:
Lauren German, Michael Biehn, Milo Ventimiglia, Courtney B. Vance, Ashton Holmes, Rosanna Arquette, Iván González, Michael Eklund, Abbey Thickson, Jennifer Blanc-Biehn
Directors:
Xavier Gens
Producers:
Ross M. Dinerstein, Juliette Hagopian, Nathaniel Rollo, Darryn Welch
Writers:
Karl Mueller, Eron Sheean
Aka:
Die Hölle, das sind die Anderen!
Studio:
Momentum Pictures
Genres:
Action & Adventure, Sci-Fi & Fantasy, Thrillers
Countries:
Germany, Action & Adventure, Sci-Fi & Fantasy, Thrillers

Reviews of The Divide

And it’s nasty as hell.

Set in a New York apartment building and then a claustrophobic cellar-turned-bomb shelter, thanks to its conscientious and paranoid superintendent (Michael Biehn), ‘The Divide’ lets us see the anarchy and eventual feral behavior of the remaining tenants.

There’s a single mother (Rosanna Arquette), bereft because her only daughter is suddenly taken away by men in Hazmat suits (Why? The movie will not tell you.); an African-American man (Courtney B. Vance) whose stoic personality is not a comfort during these trying times; two younger men (Milo Ventimiglia and Michael Eklund) who go criminal in two seconds flat, raping the women and being all macho with the super; and the last morally solid character, a young woman (Lauren German), who wields an ax because she has no choice but to protect herself from the madness.

‘The Divide’ is not exactly new territory for director Gens. In ‘Frontiers’ he had hoodlums trapped in the countryside running from cannibalistic Nazis. The ‘trapped’ factor and the pressures of being enclosed are good sources of tension. Soon enough, a modern-day cabin fever will occur and it’s a potent brew that could turn its characters on each other and become the worst versions of their selves in the end. ‘The Divide’ will leave it to you what’s going on outside; in fact, the entire movie you would want to do just that. It seems the only chance of survival for its characters is not in staying at the basement but going above ground.

It’s quite disconcerting that the tenants are easily swayed by speculation rather than curiosity. If indeed there’s supposedly nuclear fallout outside, shouldn’t you risk taking even just a little peek than accepting your fate in a bomb shelter together with sex maniacs who also enjoy violent activities against you? In my opinions, humans are born fighters, that’s a given.

If anything, ‘The Divide’ is just torture film sleekly shot and maybe even finely acted. Beyond that, the movie says nothing.