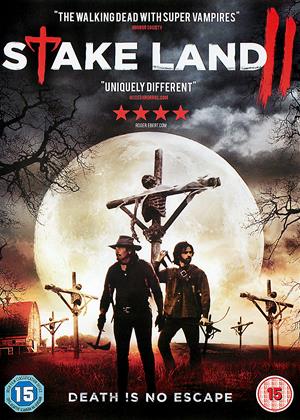 Staked on in the sun this sequel is overcooked. - Stake Land II review by DS

The original Stake Land was a breath of fresh air in the fetid landscape of the myriad vampire films that saturated the viewing choices at the time. It wasn't the slickest or best-made film you have ever seen but it wore its heart on its sleeve and it tried something original with the genre Vampirism was disease turning its victims into unthinking monsters that mostly came out at night like some bastardised version of zombies. But it was interesting and fun.

Having and end but being sort of open-ended the film could have been set up for a sequel and in 2016 along came one. Connor Paolo and Nick Damici returned in the likable roles of Martin and Mister and away we went.

The film portrays through flashbacks the gaps between the events of this film and the last and does a good job of world building using great locations to show abandoned America with only the hardy, insane or infected left alive. Conor Paolo slips back into his role of Martin with some ease and is a good central presence throughout the film although it has to be said some of the support acting slips up and down on that scale albeit they are not helped by some hokey script too.

Stake Land II while not a bad film certainly has a strong first film to compare to and unfortunately in this regard it fails. The story, although classic in so many genres, is slight and seems a far too simple reason for the whole reason for the sequel. For me though, the worst aspect was the disjointed story, it was hard to follow exactly what was going on and in particular the Mad Max style 'Thunderdome' fighting area part of the film made little sense and seemed to had a huge part of the progression missing or edited out.

Further to this, on the DVD I had the music seemed to be set at volume 10 whilst the dialogue was volume 3 meaning that deft hand on the remote control was needed and the final climactic battle took place in pitch black meaning that lots of what was occurring were nearly unwatchable as there was lots of screaming, grunts and crashes that made little or no sense as shadows jittered about in front of me.

Overall Stake Land II was a disappointment after the hugely enjoyable first film. I would have loved to have seen what became of Martin and Mister made into an exciting and maybe original adventure but too much of this film was dabbing into bits from a film here and a film there and the longer the story moved along the more drab and dull it became.

Shame but sequels often fail to live up to their promise. Time to stake this Stake Land through the heart and move on.

A sequel to the successful ‘Stake Land’ (2010), this features more of what you might expect – an apocalyptic world infested with vampires and young Martin’s (Connor Paol) attempts to survive it. Also, he’s searching for the elusive vampire hunter Mister (Nick Damici, who also writes).

The action comprises of several enjoyable set-pieces scattered about this threadbare world. Although a low-budget offering (which helps sell the austerity of the surroundings) directors Dan Berk and Robert Olsen are never over-ambitious in a way that would make things look cheap – but more concerned with telling Damici’s grounded, more intimate stories.

A downside to all this is that the episodic formula denies the film a huge sense of progression, and the project comes across as a television show. That said, this provides a solid sequel to the low-key ‘Stake Land’ story.

For the uninitiated, Stake Land II (also titled The Stakelander internationally) is a sequel to Stake Land, a very creatively done film involving vampires, stakes (both figuratively and literally), and vampire killers as well. After all of that was said and done in the first film, Stake Land II continues with the story of Martin (played by Connor Paolo), who wanders through mostly a wasteland in search of the mysterious “Mister” who taught him how to fight off the undead right from when he was just a boy. Meanwhile, Martin can’t bring himself to trust neither unturned humans, nor the ravenous vampires, and so his quest becomes – plain and simple – to survive.

This time however, Martin packs more punch than the Martin we’ve known from the previous film, and so the emotional resolutions he gets to have are more gritty and impactful given the circumstances he’s in. His personal losses make him a more relatable character, but a more devastated as well while we’re at it, and therefore Martin is detached from all emotional bearings except from killing the undead. And even then, he is the last one to manifest any kind of grieving since the stoicism is what kept him alive in the first place.

Meanwhile, “Mister” (an old vampire killer played by the creator Nick Damici) is perhaps the best side character ever. He acts both as a mentor to younger Martin and as a force not to be reckoned with. If you thought Martin was devoted to stoicism, wait until you hear the tale of how “Mister” came to be; thankfully, instead of stumbling into expositional mess, Stake Land II uses “Mister’s” friends to tell his tale instead of the man himself. Ultimately, his backstory ends up being very important for the ending of the film and, to the surprise of no one, the best part of the film as well.

Stake Land II packs a decent amount of blood and gore for those that came looking for it; plus, the film also “nurtures” a sort of a revenge element that threads all throughout the offering and makes it a little more thrilling at times than what it needs to be. This thread also connects the two characters (Martin and “Mister”) in ways that are mostly clichéd at worst, creative misfiring at best. Story-wise, Stake Land II follows a very typical post-apocalyptic vampire-type narrative which again, proves that coming up with an original and fun story is harder than it looks like.

Ultimately, if you want to get your creative juices flowing without having to drive 3 hours in order to see the latest Marvel offering – then Stake Land II would be your closest alternative period.