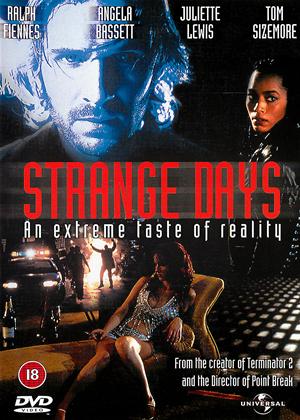 Directed by Kathryn Bigelow who had earlier directed 'Point Break', the almost so-bad-it's-good film about bank robbing surfer dudes, and went on to greater things with the Oscar-winning 'Hurt Locker', this is a sci-fi millennium apocalypse tale, released in 1995 and set on then-future New Year's Eve 1999.

The trouble with sci-fi films set in a specific time frame is that time overtakes them, and they look immediately dated. And so it proves here - rave parties, Rodney King style beatings, riots on the LA streets, leather trousers - yesterday's news I'm afraid. And of course the end-of-the-millennium proved to be pretty uneventful...

The film was produced and co-written by James Cameron, Kathryn Bigelow's ex-husband and the storyline bears his stamp ('The Terminator', 'Aliens' etc) as do the richly and darkly realised backgrounds.

I like sci-fi films. This one isn't too bad, but I had a real problem with the plot (which boils down to a simple 'bad cop' story) and the acting.

The plot involves a sort of visual/emotional narcotic second-hand experience delivered by means of a SQUID (Superconducting QUantum Interference Device), a sort-of rubbery spider-like gadget (usually worn under a wig it appears) which delivers someone else's recorded memories and experiences via a sort-of MiniDisc player. The usually excellent Ralph Fiennes plays Lenny Nero, a weakling ex-cop who does dodgy deals in the software for such devices but who is sent a snuff recording... And so it goes. Also involved is Angela Bassett who has a strong role as a strong woman (whatever happened to her?) and Juliette Lewis as Lenny's sleazy ex, who gets to reveal a bit of chest and show off her rock singer credentials (she sings two PJ Harvey numbers).

Ralph Fiennes plays a weak character with a weak American accent and seemed seriously out of place here. Not one of his best roles, considering he'd done 'Schindler's List' a couple of years before.

Given that it involves snuff recordings and scenes of sexual violence, perhaps it's not surprising that the film was cut slightly for UK release. And there's a bit too much f-ing and blinding for my taste.

It's certainly not the worst sci-fi film I've seen but after the excellent opening the rest just hasn't aged very well, so I'll give it a pretty average 3/5 stars.

This film has an intriguing premise and could have been a seminal cyberpunk film, but in the hands of Kathryn Bigelow it is a bland affair. She has made some good films, both before and after this, but science fiction just isn't her genre.

Fiennes is too posh and well spoken to pass for a - presumably disgraced - ex-cop who hustles illicit Virtual Reality POV clips in the LA underworld. Filming on real LA streets probably kept the budget under control, but it makes everything too clean and well lit. Everybody is too well-dressed and has an occupation that they carry out conscientiously, a style which must have been great for films like Blue Steel and Point Break, but that fails to evoke the lived-in, grimy street life of BladeRunner, or the urban menace of RoboCop.

There are some jarring contradictions. One character weaves her stretch limousine around streets that we are supposed to believe are in a state of militarised, lawless chaos, but then miraculously the next minute everybody is loving each other in one big New Year's Eve street party.

The Matrix would revisit the subject of VR so much more successfully four years later. I can't help feeling that in the hands of Ridley Scott, Paul Verhoeven or the Wachowski brothers this film could have been so much better. But it was James Cameron's idea, and he was big enough in Hollywood by then to get what he wanted, and he wanted to do a favour for his ex-wife.

I find it quite a boring film and I was easily distracted while watching it, but the subject matter is memorable enough and it has now apparently become a cult film. It is nevertheless a must-see for fans of cyberpunk science fiction.