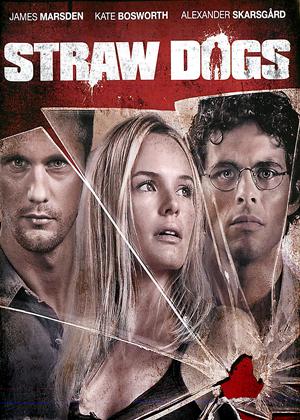 A 2011 version of director Sam Peckinpah’s 1971 film starring Dustin Hoffman, ‘Straw Dogs’ makes a go at the controversial and polarizing feature, now with a much younger cast in James Marsden, Kate Bosworth, and Alexander Skarsgard. This time it’s directed by Rod Lurie.

David (James Marsden) and Amy (Kate Bosworth) Sumner are a married couple who return to Amy’s hometown of Blackwater, Mississippi, to rebuild her recently deceased father’s old house while David also finishes a screenplay on the siege of Stalingrad. David is an Ivy Leaguer, a total outsider in the simpleton ways of his wife’s townies. Without a lick of knowledge on woodworking or dirtying of his hands, he hires Charlie (Alexander Skarsgard), Amy’s former high-school boyfriend, and his cohorts to rebuild the rundown home.

At first, work at the home goes along well, but then Charlie and his buddies begin to be a nuisance. They play loud music, make David and Amy’s home as if their own by going in and out as they please, and lust after Amy. This leads to David letting go of Charlie and friends, but what he doesn’t know is that they’re not about to leave just yet.

Next thing David and Amy know, they become victims of a frightening home invasion, mental torture, and violence that would make you squirm. In the 1971 original, ‘Straw Dogs’ was hard to watch because the brutality inflicted on David and especially on Amy were just inexplicable.

It was a study on how violence begets violence, a never-ending cycle that only leads to a horrific end. But in the updated version of ‘Straw Dogs’, it becomes a revenge story; of liberal versus Southern attitudes and the gulf between them. The violence is still daunting and excessive, but in director Rod Lurie’s adaptation, a lot of the issues have been watered down.

‘Straw Dogs’ would have been a winning remake if the production decided to steer clear of the original together. If you’re to remake anything, at least make it better, if not different.