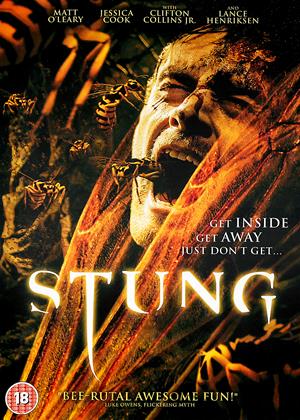 Stung is another picture in a long list of creature features that aims for more detail in the human-slaughtering monsters than its own human characters. We care more about seeing the grotesque bugs devour their prey than the humans making it out alive. It’s not the intent of the picture, but it’s hard to root for a picture with a bland stoner trying to impress the girl by not being dinner for giant insects. It’s not like there is a lesson to learn in all this. I doubt most manchildren will be lucky enough for a creature apocalypse to come along that makes the girls go ga-ga at their ability to squash bugs real good.

Our protagonist is Paul, a dreary slacker without much to say. He hopelessly tries to do good for his girl Julia by helping her with the catering business. It’s not that he’s the worst person who happens to be outside of Julia’s league; he just needs to be more interesting and could probably do so if he laid off the weed and took up a hobby or something. Maybe he could even muster some more charisma on the job that he seems to be invested within to get his act together. But just as it seems as though Paul is starting to hit some sort of epiphany about the direction of his life, the monsters crash the party. Say goodbye to Paul the manchild stoner in need of a change. Say hello to Paul the bug slayer.

The other characters are mostly just there to be simple ducks that are either picked off or hunted. Julia herself is so sure of herself that there’s nothing for her to do. Lance Henriksen sticks around as the town mayor who gets in the best lines, but only as much as he can for being a likable codger. He bring his usual charming presence, but how is he supposed to chew the scenery with dialogue such as “To be a man you have to be a man.”

There’s a thick-glasses momma’s boy who seems to have the biggest hurdle of any of the characters the way he tries to get over his mother even after being transformed into an evil bug. Sadly, he’s not given as much depth as she should have had. But, then again, nobody else does either. The remaining characters are all just meat to be gored and bled by the horrific beasts.

But, to be fair, the creature effects are surprisingly good enough to keep this picture out of the realm of the cheap TV movie class of monster horror. A radioactive fertilizer transforms some wasps into the ultimate killing machines. The mutated wasps sting human flesh which turns them into carriers that quickly birth bigger mutated bugs that burst from mouths and shoulders. The special effects for these scenes are actually pretty cool the way the insect legs crawl out of the mouth and split bodies apart. The computer graphics do well in complementing the more practical effects of the big bugs being mashed into thick slime.

There’s even a pleasing atmosphere to the whole experience. A foreboding soundtrack echoes a creepy callback to 1950’s sci-fi horror when the survivors make their way through a bug infested house decorated in gross webs of goo. And many of the kills come as genuine shocks the way the movie wastes no time in getting to the money shots of torn up stomachs and stingers through eyeballs.

But, oh, how I wish there was more to these character so I could enjoy all the gore without feeling guilty. Unfortunately, Stung, at its core, is shlock both intentional and unintentional. The few times it attempts to be comical come off as lame dude-broisms amid a script packed with forgettable characters. There’s no real chemistry, no lessons learned and no changes in character aside from an increased ability to stab giant wasps with blunt objects. The characters are actually more interesting when their decapitated heads are hanging out of the mouths of hungry wasps. At least when the newly-birthed wasp mutants spew forth from their bodies we know they’re not completely dead inside.