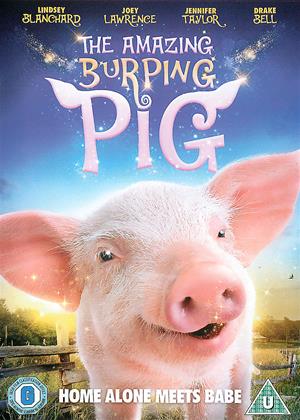 Synopsis:
"The Amazing Burping Pig" is a delightful family adventure in the vein of 'Home Alone' that will delight children of all ages. When the Rose family move from Boston to California it's particularly hard on 7 year old Talia (Lindsey Blanchard), who finds it hard to make new friends. One day she finds a teacup pig with a serious burping problem in the back garden, but fearing her parents won't approve she keeps him hidden. However, when burglars break into the house it's up to the little pig to step up and save the day. But does he have the (pork) chops to stop them?
Actors:
Joey Lawrence, Jennifer Taylor, Lindsey Blanchard, Amber Montana, Bill Moseley, Mike Cerrone, Ian Niles, Shanna Strong, Tracy Nelson, John Hennigan, Joanna Koss, Lindsay Lamb, Castille Landon, Neville Headley, Nick Principe, Ella Stock, John Sword, David Gere, Lester Keefe, Alex Napiwocki
Directors:
Tom DeNucci
Producers:
Phillip B. Goldfine, Tyler W. Konney, Richard Switzer
Voiced By:
Drake Bell, Jonathan Lipnicki
Writers:
Eric Weinstock
Aka:
Arlo: The Burping Pig / Toby the Burping Pig
Studio:
High Fliers Video Distribution
Genres:
Action & Adventure, Children & Family

Reviews of The Amazing Burping Pig

The Amazing Burping Pig, despite having one of the most ridiculous titles ever conjured up for modern cinema, is a family-friendly story about a girl and her small pig. The film is predictable, sprinkled with your stereotypical characters all around, but a fun ride nonetheless. To this extent, The Amazing Burping Pig is a fun ride suitable for the whole family, and more.

The film follows 7-year-old Talia Rose (played by Lindsey Blanchard), as she and her family move to a new neighborhood in a new house. There, everything is new and everyone acts jittery all of the time, as the family is uncertain about what awaits them in the near future. On top of that, Talia’s sisters are not especially helpful to her and aren’t very skilled in allowing her to showcase her feelings as she should. However, when Talia finds a smart, talking piglet in her backyard named Arlo (voiced by Drake Bell) – things start to change for the better. However, there is one little problem iterated in Talia’s dad (played by Joey Lawrence), who has never agreed to keeping a pet. If it wasn’t clear that he was the “made up” antagonist of the film, he’s also a dentist. To make matters even worse, Arlo has a slight discomfort that makes him burp non-stop.

These are the ground rules of the film’s plot, which unfortunately, don’t go anywhere beyond what’s already put in the sentences above.

Competence-wise, The Amazing Burping Pig is very amateurishly made, and this comes as a surprise to no one since the film is operating on a very low budget. In regards to fleshing out characters and building up worlds, the film doesn’t even come close of moving past stereotypical portrayals and clichés (as much as I hate to use that word). Still, The Amazing Burping Pig has that clumsy charm which would appeal to young children by the dozen. Which is fine, I guess.

In light of the characters, there is one saving grace as embodied through talented Lindsey Blanchard (who single-handedly saves the movie from the other wooden performances of the rest of the cast). The young actress even manages to make a line like "a real friend likes you for being you" sound passable.

All things considered, The Amazing Burping Pig has a little something for everyone: adults can teach their kids about bullying and how it shapes a person and societies as a whole; dads can find themselves as the perennial antagonists of everything ever made in existence; Moms can scold their kids as always (for the better); and kids can witness the mesmerizing spectacle that is Arlo the burping pig.