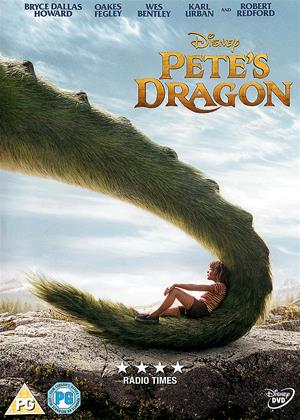 Very friendly dragon. Kids will love it. Trying to remember Rob Redford as the suave Great Gatsby, or in the Sting........long time ago..........

The cover picture from the movie is deceiving this movie is amazing it was great. The sad bits almost had me in tyres it was done so realistically!

Within the first five minutes I got bit bored of this film, thinking that they had introduced the dragon far too early on. But then as the film evolved and the storyline developed, I really got into it. Just the right amount of fun, adventure, sadness and tear jerking. A really well made enjoyable family film with all the right elements. Not a block buster or an award winner, not a lot of originality either, just a good old fashioned family film. Nice to watch with great feel good factor. Highly recommended!

Pete’s Dragon is charming, loveable and endearing piece of filmmaking that never stops to amaze and elicit those butterflies in the stomach area during its longer-than-what’s-necessary running time. Sure, it has its fair share of cheesiness, but that doesn’t stop it in the slightest to attract newcomers to the magic that Disney used to cast with previous pieces such as Bambi, The Sleeping Beauty and Beauty and the Beast.

Director David Lowery knows what he’s doing and owns it every step of the way. He’s constantly traversing between the nostalgia of Disney’s so-called ‘classic era’ of cartoons, and the new era where (obviously) CGI is key, which he perfectly molds into a concoction of inspiration and awe for both the young and their parents to enjoy and appreciate.

Pete’s Dragon calls upon several Hollywood stars to help the experience spread among moviegoers. Robert Redford, Bryce Dallas Howard and Karl Urban come to mind, who along with promising star youngster Oakes Fegley do everything in their power to produce magic without imposing aggressive overacting to an audience who’s become more wary with each consecutive Hollywood remake – from the 90’s onward. Yes, Pete’s Dragon is a remake of a not-so-well-known 1977 film by Don Chaffey, which was both a commercial and critical bomb. And by bomb I mean it didn’t fare well at all.

The biter-sweetness of Pete’s Dragon story, combined with the greenery of New Zealand’s vast landscapes (which saw its fair share of providing locations for promising directors) makes for a perfect setting to put a prospective legend of a green dragon in a cloak of ambiguity and let the audience decide what to think of it. In this case, I personally was impressed with how a mythological creature of such dimension was given a perfectly fleshed-out character and (several) traits to root for. Go Elliot go!

To say the movie follows a famous formula is not to criticize said movie, but to give praise on how it manages to surprise despite the odds being against its favor. Seemingly questionable is Dallas Howard’s range of acting which spans from ostentatiously disinterested to outwardly flat. But, given her work in, say, Jurassic World, this is neither surprising nor important enough for one to deeply base his film preferences upon it.

All things considered, Pete's Dragon is a well-made piece where the sums of its parts come together to form an experience for everyone to enjoy in the theater next door.