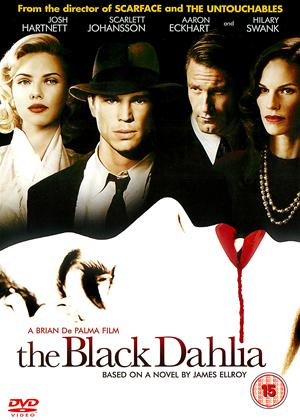 Reviews (7) of The Black Dahlia

This film is a mess. The narrative is totally incomprehensible. I had to watch some parts twice - and I'm still not entiely sure what happenned. It was also hard to understand what was being said at times - partly because the film was based on a James Ellroy book and has kept true to his slang style of writing but also because of the inept acting. Infact there were some real dud performances all round - especially from Hillary Swank and Scarlett Johansson who were flat seemed totally miscast. I like the films of Brian de Palmer when he has big set peices to carry off - eg Carlitos Way and Scarface - and he does a pretty good job in this film when the two police officers are caught in a shot out and the body is discovered. Unfortunately the rest of the film fails to match this and is more Bonfire of the Vanities than Carlito's Way.

What a let down. I found this so hard to follow that I don't really understand what happened in the end and what's more I didn't really care. I have loved other films of Ellroy's books and other de Palma movies, but this was a completely confusing disappointment.

Such a mistake - The Black Dahlia review by CP Customer

I was excited about this film, as I always enjoy seeing Scarlett Johansson and Josh Hartnett completely endeared himself to me in Lucky number Selvin. However, I was very disappointed. The plot line seemed to go no where, and Hilary Swank had no function.

Not the dramatic mystery I was hoping for, and I actually fell asleep for part of it and had the chore of having to re-watch it. I would not recommend this at all

Great if you need a nap! - The Black Dahlia review by CP Customer

Totally concur with the other reviews left here - wish I'd read them BEFORE we rented out this film. Got fet up halfway through waiting for something to happen and went and did something less boring instead. If you like a nap through your movies then rent this, otherwise give it a wide berth!

hard to grasp - The Black Dahlia review by CP Customer

I think Josh Hartnett carried this film all the way through, without his acting skills i would have struggled to keep watching. There seem to be too many characters with hard to remember names which you have little information about, so when a 'link' is revealed, you struggle to remember who the guy was and in what way he was associated to the other guy if you get my meaning. i was looking forward to this film as a Josh and Scarlett fan, but unfortuantely it didn't live up to my expectations.

The Black Dahlia was a severe let down. Dire compared to L.A Confidential, the characters are charmless, uninteresting and dull. The James Elroy book is brilliant, so my review is probably not objective due to the time old problem of watching the film after reading the book - it just seems they took out all the good parts of the book and featured the dull bits. Avoid this film!

Black dahlia - The Black Dahlia review by AM

This film is an absolute turkey. Storyline is incomprehensible, actors mumble for large parts of the film. Good cast, good author - how could they get it so wrong?