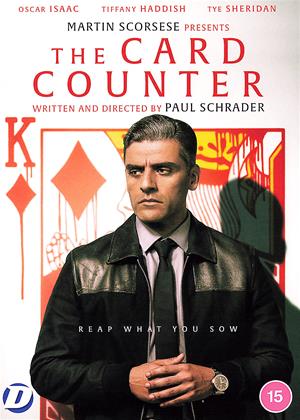 Reviews (2) of The Card Counter

An oddly interesting, very American film about the world of gambling and casinos - The Card Counter review by Philip in Paradiso

William Tell (actually the character's name, played by Oscar Isaac, charismatic and captivating) is a professional gambler. He taught himself how to count cards during an 8-year sentence spent in a military prison. He is a loner, who tends to win but avoids big gains, to avoid drawing attention to himself. He is self-contained, detached from the world, seemingly without a personal and sentimental life, and without friends. There is something enigmatic about him, and we gradually learn why he is the way he is. The movie is, really, about what happens to him, and how he changes over the course of the film, and why.

The story gives you an insight into the world of gambling and casinos. It is very American - the America of suburbia, motels, motorways, and so on. I have been to Las Vegas and it reminded me of the city and its gambling dens. Personally, I found the plot broadly implausible, but I cannot elaborate as I don't want to spoil the film for those reading this review. The young man playing Cirk (Tye Sheridan) is, also, in my opinion, rather annoying and unconvincing: you feel you are watching a sulky teenager moping about - but, perhaps, that is precisely what he is supposed to be.

On the other hand, where the film is very good is at creating a captivating atmosphere: this is done very well. There is something cerebral, contemplative - meditative, even - and claustrophobic about the movie, also because of the central character's lifestyle and personality. The key theme of the film, ultimately, is: what does it mean to belong, and how do you integrate into society? What if you are going to be on the margins forever, and what does it mean if you are? This may sound pretentious and too intellectual, but the film touches upon these questions in a subtle way, through the story and the character of William Tell - a vey odd choice of name all the same... As a result, it is a rather unusual film, but an interesting one. I would not say it is excellent, but it is a good movie, despite its obvious flaws. I enjoyed watching it, overall.

Isaac plays William Tell a small time professional gambler on the circuit. We learn he spent time in prison and is a very austere figure who checks into a single motel room every time and covers all the furniture in white linen bound with twine.

At one casino he briefly attends a lecture by security consultant John Gordo (Dafoe) and is approached by young man called Cirk (Sheridan). Its revealed that both Tell and Cirk's father served in Iraq - more specificly as interegators at the notorious Abu Graib prison where torture of suspects was routine.

Tell got almost 10 years in Leavenworth military prison as did Cirk's father but on release got hooked on drugs, beat his family and then shot himself.

Cirk holds Gordo responsible (he was never convicted) and intends to torture and kill him and tries to recruit Tell.

He refuses but offers to take Cirk on the road on the gambling circuit - there they meet La Linda (Haddish) who offers to put up prize money to finance Tell in bigger tournaments so the 3 criss cross the US while more and more back story is uncovered......

Its a real slow burner but is really engrossing with Issac giving a haunted electric performance of a deeply damaged man who is desperate for some kind of redemption and sees that possibility in Cirk.

The other performances are equelly good and although Schrader takes his time with the narrative its well worth sticking with.

In the tradition of other Paul Schrader films, The Card Counter is a deeply contemplative and cerebral picture of men trying to find themselves. Oscar Issac plays William Tell, a card player who keeps to himself. He’d spent time in prison and now spends time at the casino. He also spends a lot of time trying not to dwell on his darker past in the military.

Slowly, William reveals to us his life through inner monologue and we hear just how much he stays focussed. His time at blackjack tables finds him walking through the rules of counting cards. He’s not only aware of the rules and the tricks but also the odds. This is a guy who spent his entire time in prison trying to learn the specifics of becoming a master of the cards. Even more, he’s become a master of making a living at it, knowing when to pull back.

But, wait, why was he in prison? He was previously served in Abu Ghraib where he was part of the torturing of prisoners. It’s a time he’d rather forget and not talk about it. He’s much happier at either the casino or in a simplistic environment. It’s why he always stays at motels where he can rework the room to be covered in sterile colors with no distractions. He doesn’t want to be reminded of his dark history. Yet it continues to creep into his nightmares, appearing in the form of a nerve-wracking sequence of distorted camera lenses.

The past finds a way to keep coming back to him. While at a law enforcement convention, he runs across an old buddy, Major John Gordo (Willem Dafoe). Gordo did not go to prison for his atrocities. In fact, life turned out great for him. William, trying to lead a quiet life of cards, tries to deny this revenge. Not as keen to sit back and let sleeping dogs lie is Cirk (Tye Sheridan). He’s the son of one of the soldiers who killed himself after being imprisoned. Having met Cirk, William tries to steer this kid away from a bad ending.

Pulling William back from the brink is the clever and cunning La Linda (Tiffany Haddish). She runs a card-playing stable and enjoys having someone as skilled as William in her ranks. She also manages to melt his heart enough where he feels he can be just a little more honest. William keeps to himself so much that he’s such an enigma worth unearthing. Once Linda manages to ease him up a bit, it’s a euphoric moment for both his sexual embracement and a neon trip through a garden of lights.

The film doesn’t quite stick to the landing as William’s struggle for contentment is treated with more uneasy catharsis than one might expect. The morality also becomes more adrift in his final violent act, making Schrader’s First Reformed seem blunt by comparison. That being said, I love the atmosphere he weaves. There’s this cold sense of dread where even the allure of the casino feels suffocating. The blunt messaging of William encountering an unbeatable card player who can’t stop chanting “USA” is a nice touch of the obvious allegory. The acting is also exceptional. Everyone is in top form but Oscar really brings his A-game. There are several long-shot conversations where the intensity slowly builds in his face and makes him a terrifying presence.

The Card Counter is not going to play well with others and not just those who can’t deal with such cerebral intensity. It slowly brings us into a world of deep terror and crippling isolation. It’s all brought out in such a way that only Schrader’s hand could craft. It’s another stunning neo-noir picture from a director who is always reliable with contemplative neo-noirs.