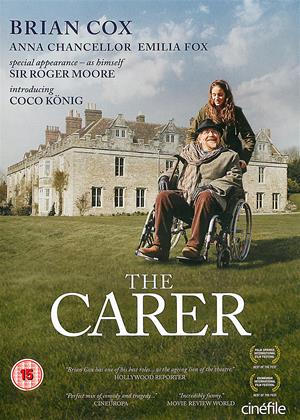 Synopsis:
Brian Cox stars in this funny and poignant drama as a curmudgeonly actor in the twilight of his life. Acclaimed for the performance of his career Cox receives stellar support from Emilia Fox and Anna Chancellor as he spars with his beguiling young Hungarian carer (newcomer Coco Konig). In the same vein as 'Quartet' and 'The Best Exotic Marigold Hotel'. Sir Michael Gifford (Cox) is a retired Shakespearean actor suffering from a form of Parkinson's that has left him flailing and cantankerous at his country estate. He has alienated a host of caregivers, but his daughter forces a new companion on him, a Hungarian refugee who has acting aspirations of her own.
A friendship develops between the newcomer and her charge, a bond that threatens some of Sir Michael's existing relationships but ultimately proves beneficial for all.
Actors:
Brian Cox, Anna Chancellor, Emilia Fox, Coco König, Karl Johnson, Selina Cadell, Andrew Havill, Roger Moore, Richard Ridings, Andor Lukáts, Emily Bevan, Ruth Posner, Maitland Chandler, Adam Morris, Paul Bown, Julia Dearden, Talya Harris, Annabel Bates, William Moore, Robert Hamer
Directors:
János Edelényi
Producers:
József Berger, Steve Bowden, Charlotte Wontner
Writers:
Gilbert Adair, János Edelényi, Tom Kinninmont
Studio:
Cinefile
Genres:
Comedy, Drama

Reviews (2) of The Carer

What makes this film so good is the acting, totally belivable, moving true to life. Every one should watch this film.

Loved this film, although a little sad it was really funny in parts, Brian cox is always fab, I love watching anything with him in. He can be humorous while pulling at your heartstrings at the same time.

Carer (The Carer) is a tried-and-tested formula told with such delight as to put numerous indie dramas to shame. Moreover, Carer is also filmed in a way as to exude art in its highest, purest form, unattached to the central plot and unattached to the medium of film itself. In conclusion, Carer is highly memorable, enjoyable, inspiring, heartwarming, deeply emotional, and is also a term I often tend to avoid using: poignant.

The film stars the excellent Brian Cox as the ever-demanding Sir Michael, and big screen newcomer Coco Konig in the role of compassionate and smart Dorottya. In it, the once legendary actor Sir Michael Gifford is plagued by a rare incurable form of Parkinson’s disease, and requires medical care by aspiring actress Dorottya, both of them hoping their wishes would be fulfilled (he to be left alone, and her to hit it big). As the story progresses, so do the characters become more and more open to honesty and compassion, as the audience witness this character growth and bloom firsthand. Bloom because they happen to throw some of their previously assigned character traits (screenplay-wise) under the rug to show how they’ve truly, emotionally matured. Add to this the award-worthy performance of Brian Cox, and you have yourselves a heartfelt drama at works here folks.

Carer is not without its flaws; a certain side plot involving housekeeper Milly (Anna Chancellor), who is Sir Michael Gifford’s former darling, doesn’t resolve as well as it should (or at all for that matter). And this is where Carer fumbles: picking up narrative spots, exploring them to no end, and then putting them back on the shelf as if nothing ever happened. Also worth mentioning is the suspicions in light of Dorottya’s motives for accepting the job get no conclusion whatsoever.

Despite all the broken side plots, Carer still manages to convince audiences that it possesses some emotional depth – mostly thanks to the main story, which is presented firmly and ventures into some unfamiliar territory, albeit with no justifiable way of doings so. Still, Carer’s obsession with emotionality comes not from pondering to a wide audience demographic, but rather from the sharply developed Shakespearean themes and dialog that enriches the whole ordeal by adding real depth both character and story-wise.

Finally, Carer is life-changing to some extent, albeit meant in the most scrupulous of ways. And when paired with both the comedic and dramatic timings of underrated actor Brian Cox, Carer becomes more than a film and grazes the surface of what a timeless classic would look like (just not there yet). If you have a chance to pick up this film, do it quickly and do it now, alongside a warm cup of Earl Grey on a rainy Sunday night when it’s just you and your SO, or just you for that matter, no one will dare to judge.