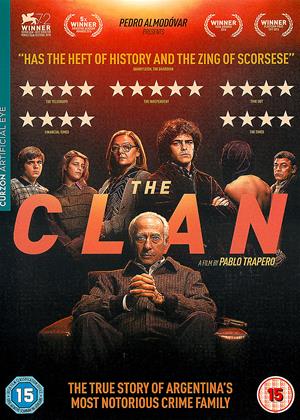 It could be argued that both the strongest and weakest points of this uncompromising drama are that it isn't "The Godfather". Immensely powerful though that trilogy is (two-thirds of it, anyway), its characters are larger than life, and have justly been called Shakespearean. The protagonists in this sordid tale are realistic in a way the Corleone family aren't, and that makes them both more horrifying and less interesting. I was reminded of Ben Wheatley's "Down Terrace", a black comedy so black it's debatable whether it qualifies as a comedy at all, but even that kinda sorta has jokes in it. If this film has a central theme, it's the banality of evil. The Puccios are dull. They seem to spend most of their time having family dinners at which ordinary everyday things are discussed. Except of course when they're kidnapping and murdering innocent people for money. As you do.

The story is told from the point of view of the eldest son, essentially a nice guy who just wants a normal life, whose inner conflict between loyalty to his family and not wanting to help them commit horrible crimes grows as the story progresses. Unfortunately he's not a very interesting person, and he never really does anything that matters, allowing himself to be controlled by his much stronger-willed father and swept along by events until they're out of anyone's control. Basing a film on real life means you can't rewrite everything you don't find dramatically satisfying, but this isn't a documentary and many scenes in it are at least partly fictional, so the scriptwriters could surely have made their monsters less boring. The father, who is depicted as being personally responsible for just about everything, is a cold-eyed cipher we never come to know or understand; the young man whose point of view we share nearly all the time is well-meaning but too weak to defy his evil dad and that's about it; and the rest of the characters, especially the women, are basically furniture.

What I found most baffling was the complete absence of any apparent motivation. I could understand the backstory being sketchy because Argentinian audiences would be as familiar with the Puccios as we are with the Krays, but there's literally none at all. And although it's vaguely implied that they've been doing this kind of thing for years and belong to some sort of Argentinian Mafia, it's so unclear that I googled the Puccios to get the real story, and I was surprised to find that the crimes depicted in the movie are the only ones they're known to have committed, which at least explains why as ruthless career criminals go they seem so amateurish.

The hopelessly inadequate characterisation of just about everyone prevented me from caring about them as much as I needed to if the film was going to truly engage me in the way it was meant to. Anyone who isn't a psychopath understands that what these people did was absolutely wrong, so merely showing us how evil they were is neither useful nor interesting. How did they get to be that way? That's an interesting question which is never answered. Instead, the story consists of bad things happening while the guy we're supposed to like feels really guilty but doesn't do anything about it. And since the crimes start out very bad indeed and don't get any worse, the dramatic tension doesn't build in the slightest. Very bad people do very bad things until something makes them stop. The end. This is one of those deep, dark, grimly serious films which people pretend to like more than they really do because they feel that they ought to. It left me feeling slightly depressed but it didn't genuinely move me, and considering what it's about, it really should have.

What is striking about this film is 2 things. First of all, it is based on a completely true story: how extreme violence was born out of the military dictatorship in Argentina, which ended in 1983/4. In a way, the criminal violence depicted in the movie is a prolonging of the institutional and political violence of the dying military regime: an entire country was brutalized and things like that do not happen in a vacuum. Certain individuals have (or believe they will always have) impunity. Political violence morphs into criminal enterprise.

Second, what hits you is the ordinary character of 'the clan' -- outwardly an average middle-class family of good Catholics who are pretty dull and ordinary, except for the eldest son, who happens to be a star rugby player. It makes you think of the phrase (H Arendt): 'the banality of evil'. Who knows what, and who is going to do something about it, if anything? Who is going to keep quiet and avoid rocking the boat?

The characters lack depth at times, and yet the film is fascinating in its own, horrible way. The patriarchal figure of the father is, in his own quietly spoken way, truly scary. Overall, a good film that I recommend.

Watching this film based on actual events I did begin to wonder about this family. This did seem to be about a middle class family that lived very ordinary lives but kidnapped and killed victims as sort of a side line to earn a bit of extra money. They regularly prayed at meal time and appeared quite devoted to each other, but the father was very controlling. The victims were kept in the basement of their home where their cries of pain and pleas for their lives could be beard through the house. The younger members were trying to do homework while this was going on !! They did not seem to live extravagant lives as the result of their ill gotten gains, most of the money appears to have been hidden away. The victims were all killed to try and avoid detection.

This was carried out when Argentina was changing from a military dictatorship, where kidnapping was a state policy, to a democracy. I got the impression that the father may have been involved with these state kidnappings but then decided to go into business for himself. He was eventually "shopped" by his previous accomplices to cover up their own crimes as Argentina began to change. Their sentences did appear to be light for the crimes that were committed.