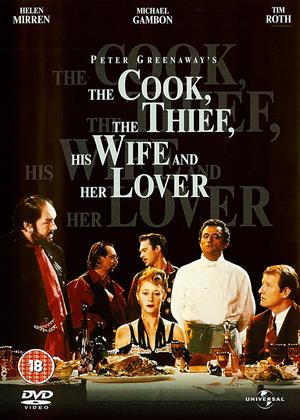 More like The Cook, the Thief, His Wife and Her Lover

Reviews (2) of The Cook, the Thief, His Wife and Her Lover

Delicious! - The Cook, the Thief, His Wife and Her Lover review by DW

An entertaining and darkly comic tale of revenge and cuisine.Difficult to review (without giving away plot spoilers) but if your looking for a film that blends great performances,Greek tragedy,wonderful cinematography with a nice helping of sex and food then look no further!

A feast for the senses - The Cook, the Thief, His Wife and Her Lover review by TDM

Is this film a horror? A satire? Art house junk making an effort to offend?

Maybe its all three - and your time is well spent letting this sink in and rewatching it (I haven't seen this film in a decade).

Set in four colour coded sets, filled with extravagant costumes via Gautier, the four titular characters take you on a run through comedy, disgust, passion, revenge and hatred.

And yes, this is certainly a film to watch with caution, it contains much that would offend and certainly in the modern times, comes with a trigger warning for abuse.

However the leads are exceptional; pulling off scenes which on paper may sound gratuitously over the top, with expertise and empathy.

You wont look at stellar talent like Mirren and Gambon especially, in the same way again.

I can absolutely understand why this film wouldn't be everyone's cup of tea; taboo subject matter, garish and unflinching visuals filmed in a highly saturated style, perhaps over pretentious, maybe a little dated now?

However, this is a daring, controversial classic starring some of the best talent of a generation and it is worth your time to watch it if you don't mind a little strong content and enjoy being challenged by cinema.

Just perhaps not over dinner....