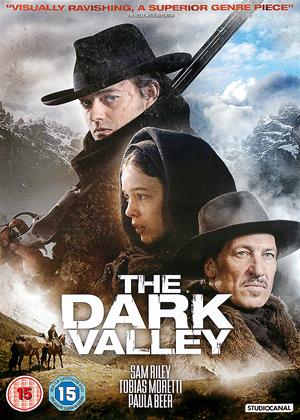 Synopsis:
A lone rider arrives in a small high mountain village; nobody knows where he is from and nobody wants him there. Greider (Sam Riley) is met with scepticism and paranoia arid is reluctantly offered shelter for the harsh winter ahead. The village, cut off by snowfall with barely a ray of sunlight reaching the valley through the winter months, is a bleak, isolated and lawless place. When a tragic accident leads to the death of an elder's beloved son, suspicion is raised. When another son is mysteriously killed, it's clear this is not a coincidence, and this visitor carries a dangerous and deadly secret with him.
Actors:
Sam Riley, Tobias Moretti, Paula Beer, Thomas Schubert, Carmen Gratl, Clemens Schick, Helmuth Häusler, Martin Leutgeb, Johannes Nikolussi, Florian Brückner, Heinz Ollesch, Franz Xaver Brückner, Xenia Assenza, Beatrix Brunschko, Gerhard Liebmann, Josef Griesser, Johanna Bittenbinder, Erwin Steinhauer, Hans-Michael Rehberg, Thomas Hochkofler
Directors:
Andreas Prochaska
Producers:
Stefan Arndt, Helmut Grasser
Writers:
Martin Ambrosch, Andreas Prochaska, Thomas Willmann
Aka:
Das finstere Tal
Studio:
StudioCanal
Genres:
Action & Adventure

Reviews (1) of The Dark Valley

Firstly, I should point out that although this film for all practical purposes a western, the action takes in the Austrian Alps, and the dialogue is in German. I didn't mind, but I know some people hate subtitles. You have been warned.

If you're as keen on westerns as I am, you'll notice a lot of nods to classics of the genre, ranging from "Shane" to "High Plains Drifter" (and some not-so-classics, such as "Death Hunt" starring Charles Bronson - remember that?), and taking in quite a few early Clint Eastwood films; the nastiest of the baddies' resemblance to Lee Van Cleef is presumably no accident. Inevitably, the plot is an amalgam of various classic western tropes: the mysterious stranger who rides into town, the tyrannical patriarch with a brood of very nasty sons, and so on.

What makes it different is its sheer darkness. Hey, it's even got "dark" in its title! The Very Bad Thing motivating the hero, which we get a glimpse of in the prologue, turns out to be almost impossibly horrible in literally medieval ways. The hero, if he can be called that, is willing to even the odds in what initially looks like a six-against-one showdown by committing sneaky murders that, oddly, the movie at first tries to pass off as accidents, though there's never any real doubt who was responsible. And the violence is brutal. Gunshot wounds, along with other even nastier injuries, are portrayed realistically. There's a lot of blood, and non-fatal wounds from high-calibre bullets reduce people to screaming helplessness ("Full Metal Jacket" was clearly an influence). It's almost a horror western.

What lets it down is that same relentless grimness. Everyone, especially the central character, seems to be allergic to smiling, and no valid reason is ever given for why these people put up with living in a tinpot dictatorship in a freezing valley where survival is marginal at best when normality exists a few miles away. The overwhelming unhappiness, alleviated only by what is literally the last line spoken in the film, is rather depressing for the viewer. Also, I'm not sure that horror-movie jump-scares are entirely appropriate for a western, but I'm absolutely certain that accompanying the climactic gunfight with a crappy modern pop song called "How Dare You" performed by Screaming Satellites (an extremely generic and mediocre band who appear to be famous only for contributing this song to this movie - I assume that at least one of them must have been sleeping with the director) was not a good idea.

It's not altogether bad, but it's trying for a higher concept than it's capable of achieving, and it ends up being nowhere near as deep as it wants to be, and no fun either. Also, the direction is somewhat flat, so there's no real tension other than the artificial kind produced by heavily telegraphed jump-scares. I'd give this two and a half stars if I could, but I'll go the extra half because it's nearly a good movie. But it's just a bit too formulaic and weirdly leaden in its pacing to really make the grade.