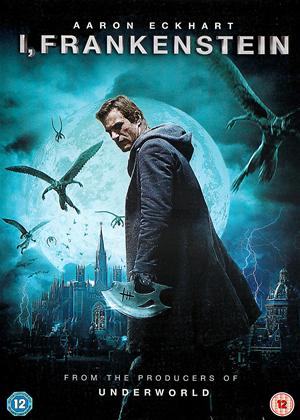 Reviews (3) of I, Frankenstein

original and entertaining - I, Frankenstein review by CP Customer

Ok, it's Frankenstein. I will not pretend it is a movie with deep meaning, however it is original in its story, very well executed and I found it quite entertaining. I would definetly recommend it to anyone who enjoyed Van Helsing or Constantine!!!!

Poor - I, Frankenstein review by JD

I gave up watching this silliness after 20 minutes; those who kept going to the end told me not to bother watching the rest; it was neither an interesting plot nor exciting.

Stupid cgi-fest fails to engage - I, Frankenstein review by Alphaville

Except he isn’t Frankenstein. He’s Adam. He’s killed his creator (who actually was Dr. Frankenstein) and 200 years later (i.e. now) he’s joined the Gargoyle Order to fight demons. It’s 88 minutes of risible dialogue and cgi gargoyle-demon action nonsense. Aaron Eckhart slums it as Adam and Bill Nighy turns up to chew the scenery as Chief Demon. Not even they can save it. Only high production values offer occasional interest and make you wonder what was everyone involved thinking.

After all the dire films that have been made about Frankenstein its hard to think Mary Shelley can roll over in her grave anymore but here comes I Frankenstein to solve that problem with its Underworld formula (right down to the hammy Bill Nighy performance) and it’s shockingly stupid premise.

The film follows Adam (Aaron Eckhart), Frankenstein’s monster, a corpse reanimated only to turn on his creator and flee the world of man. Upon his return he finds himself in the middle of a war between Gargoyles and Demons as he struggles to stay out of the way. However when he finds his creation is linked to this century old conflict he must face his foes head on and finish the fight once and for all.

From the start its easy to tell that many of the actors involved know exactly what kind of film they are working on. Each and every performer pushes it to the limits of intensity as they head into the realms of so bad its good cinema. Nighy and Yvonne Strahovski are the worst offenders as the latter puts together a horrendous British accent to go with the completely pointless part of a scientist looking into reanimating the dead.

The film itself is a mindless action romp with creatures exploding left right and centre as people try to sound menacing in a world where the worst thing that can happen to you is you turn into a ball of light and disappear. The film has no sense of scale, sure the films final would beg to differ in the amount of explosions and carnage it wreaks but it doesn’t understand that for there to be remorse and suspense there have to be consequences.

Nothing in the entire picture ever prepares viewers for the completely consequence free blood bath that the film is. People die left right and centre and the film plays it off like another day at the office for Adam and his metal pipes of skull trauma.

Some may find enjoyment from the films lack of a brain but in the end there is nothing to see here, despite the millions of dollars that have been spent making I, Frankenstein that try to suggest otherwise