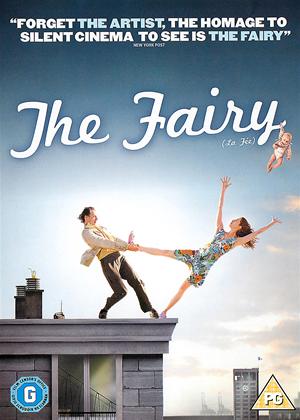 Reviews (2) of The Fairy

Astonishing, surprising, a revelation - The Fairy review by EN

This film must be seen to be believed. The only thing I can think of comparing it to is something like the work of Charlie Chaplin or perhaps Monty Python. There is genius here, humour, surrealism; joy and sadness and DANCING - lots of dancing ( of a glorious, supremely theatrical super-humorous type - don't expect contemporary dance nor ballet nor ballroom dancing - it's way, way subtler and more surreal than that).

It all adds up to an oddball mini-masterpiece, an absolute joy. If I say anything else I'll give it away. Invest time in this and you'll be rewarded - be prepared to be immersed in non-sensical, oddball gentleness which will exhilarate and delight. Fiona Gordon, Dominique Abel and Bruno Romy, who wrote, directed and star here, must be a trio of creative geniuses and I only wish I lived in France so I could beg them to teach me to dance like they do.

Quite likeable physical comedy - The Fairy review by rh

I found the film to be quite funny and we watched as a family which made it more enjoyable. The comedy is mostly physical although there is some dialogue. Sometimes the plot got a little lost or opaque. But that did not really matter.

A rather nonsensical story about a hotel night porter who goes in search of a guest who, arriving with no luggage or shoes, declares herself a fairy and grants him two of the three fabled wishes only to then disappear. From here the film continues to spiral into further absurdity with the fairy seeming to become pregnant over night whilst also potentially being nothing more than an escaped psychiatric patient.

Yet there is something utterly charming about The Fairy – once you become wrapped up in the characters and completely forget that she’s supposed to be a fairy at all – it is a whimsical and brilliantly comic movie that struck and tickled me in the way that classic Chaplin movies do the very first time you see them.

There is something almost slapstick about the comedy, yet the characters themselves is so wonderful that the movie manages to remain above that dangerous line that separates true slapstick from over-acting. This is largely achieved by the brilliance of the performers, who it appears are also the writers and directors of the this lovely little piece, their characters matched in that lovely yet completely opposite fashion that European cinema does so well.

Beyond the original premise there’s not a great deal of story to The Fairy but in all honesty it doesn’t really need it, the main characters and the fantastic supporting cast are enough to enchant and captivate as they are. Although a particular favourite moment of mine involves another hotel guest who is refused entry after turning up with his dog, only to hide his dog in his bag and then constantly find himself looking for it as it has wandered off.

A perfect movie for a rainy afternoon, The Fairy will charm you and lift your spirits.