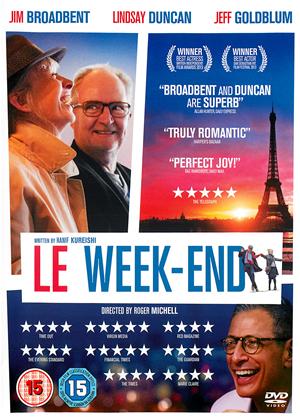 In some ways this film is very irritating and smug - the sort of thing cobbled together by arty leftwing times in Hampstead, all too used to being self-obsessed at their Islington dinner parties.

It is, however, redeemed by 2 things: 1) the sheer quality of the acting all round, esp from Jim Broadbent; 2) a bang-on speech by his character at the end (the reference for a former poly university as a factory producing idiocy will ring a bell with many who have studied or taught at such places).

Worth a watch to pass the time - but as flimsy and unsatisfying and an amuse-bouche really...

Some negatives about the film: some events are so unbelievable as to be ludicrous - I just do not believe risk-averse boring teachers aged 60 would behave that way; the female character here is very odd - almost schizophrenic - and it's amazing anyone would put up with her for a weekend, let alone a 30 year marriage; a senior lecturer would not be sacked for making one comment - a complaints procedure would mean at most suspension, and probably not even that, so the writer is using a skewed plot point here; apparently, this wife is a schoolteacher of biology GCSE - very unrealistic, as she is married to a lecturer in philosophy, and she's just the wrong personality type (the screenplay writer Hanif Kureshi is clearly ignorant about real life schools and colleges these days, as many are, cf Martin Amis); some set pieces are reminiscent of the worst of pretentious rep theatre, all wordless and contrived; the ages of the leads are a bit off - if this is set in 2013, then someone in their late 50s would not be of the 60s generation listening to Bob Dylan - they would more likely be into Queen and Elton John, or prog rock, which was fashionable in the early/mid 70s.

Very slow not funny and certainly not one to watch with kids. Lots of bad language and occasional nudity.

This was a film that I was looking forward to I was disappointed. Good idea of a story, but I thought it was very poorly told. The Acting was good the only redeeming part.

Ever get that feeling that if you stay next to someone for any longer that you might physically attack them? Well thats what being the central couple in Le Week-end is like. Not only is this mismatched pairing constantly on the brink of saying something they might ultimately regret but they are so close to saying the right thing, the things they have always been to afraid to say and while this is portrayed through strained means it doesn't make it any less compelling.

Le Week-End follows married couple Nick (Jim Broadbent) and Meg (Lindsay Duncan), two highly cerebral educators returning to Paris, 30 years after their honeymoon there. Nick is looking to reignite their marriage as they approach retirement and Meg just wants to get through the weekend but when they run into Morgan (Jeff Goldblum), an old student of Nick's they discover the sides of each other they may never have known or had just forgotten over time.

While the weekend itself is revealing and transforming for both of them it is less so for its viewers. It's grand ideals are hidden behind psychobabble and half baked philosophies that the two recite with gleeful abandon. The concept of an original thought is lost as Le Week-End tries to be the 4th chapter in Richard Linklater's Before series without really understanding what made those films so potent and relatable.

Both Meg and Nick are so disconnected from the real world its hard to imagine them in a world away from the fake one they have created for their trip. The two even bicker with Socrates and Plato in mind, with long words and little concept of reality, an element of this film that turns the whole feature into a piece of unbelievable fiction.

Watching Broadbent and Duncan spar with each other is worth watching for but if you expect a powerful look at marriage, commitment and the concept of love then this is not the film for you. The picture has an ideal in its head but no clue of how to make it show and in the end its the little things you end up appreciating about Le Week-End, much like marriage itself.