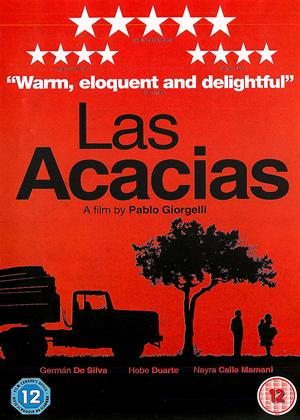 Beautifully and so realistically filmed. But the human feeling in this film has to be encountered to be believed. If you don't like subtitles you don't need to worry - there is almost no dialogue! The acting is marvelous but so subtle - hardly there - but the feelings come across. This is one of my top ten favourite films now - the kind of film which is a joy to the heart. I can't wait for the directors next film to come out

One for the road - Las Acacias review by BE

If you've watched the trailer, you've almost watched the movie! A long time to spend in a truck with three people but captivating non the less. More an observation on the dynamics (or not) between two people and a five month old baby. When the baby is on screen, she steals the show every time. Action and drama it ain't but a very enjoyable quiet movie.

It s a warm , very human story, with very few words, yet at the end you feel that you know the characters thoughts and dreams well.

Only thing is that the film extremely slowly through time in order to build up the characters, rather than the plot.

This was a true delight. A small, delicately depicted moment in life that said so much and is exquisitely acted

No words for how good this is! - Las Acacias review by TE

It's tempting to write a detailed review of this superb film, a chunk of words to describe the subtle nuances of character, longing, isolation and hope that underpin the simple narrative. But, in keeping with the minimalist brilliance of 'Las Acacias', suffice to say that this is humane, emotionally intelligent cinema at its very best.

Moving but ultimately maybe too slight to make a lasting impression on me. Time will tell. It reminded me of Bombon El Perro with it's minimalist style. Sad and interesting but like a long road trip, wearying.

Ruben (Germán de Silva) a long distance lorry driver spends the majority of his time alone, passing great lengths of motorway entwined landscape delivering timber from Paraguay to Buenos Aires. At the special request of his boss, and for an extra fee, Ruben agrees just this once to transport two pieces of extra cargo; a single mother and her five month old daughter, Anahi.

The woman, Jacinta (Hebe Duarte), is travelling across the country to stay with relatives and search for work, unable to support them where she is. This, and the discovery that Ruben has an eight year old son he has not seen since he was baby, is the only small pieces of personal information we learn about the strange travelling companions; yet as the movie progresses a tenderness and intimacy grows between them that is quite enchanting.

Many audience members will find this movie quite trying, the long expanses of silence not only reflect the unvisited and unknown stretches of landscape but also echo the internal silence of loneliness and solitude, emotions felt both by the characters and by the director, Pablo Giorgelli, himself.

Though nothing of much consequence happens during the movie’s 90-odd minutes one cannot help but feel that this journey has irreparably changed the lives of the two people taking it. The mood of internalisation, self-reflection and solitude slowly ebbs away as glances pass between the two and their physique’s become relaxed and almost welcoming; eventually rewarding the audience with a bright sense of hope and potential not only for the characters on screen – whom you are desperately willing to embrace one another – but for those sitting in the theatre. Though it won’t be to many people’s taste Las Acacia is a quiet and soulful movie, winner of various reputable awards at Cannes and elsewhere, and is the perfect movie for anyone feeling a little sorrowful or alone.