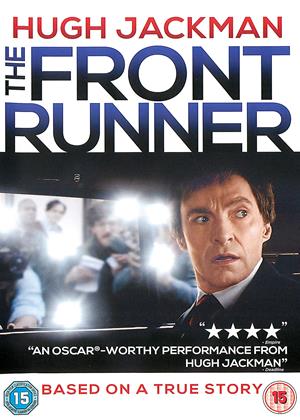 Reviews (2) of The Front Runner

Sort of documentary. Sort of boring. Historically maybe interesting, but almost as tedious a piece of mundane history as Vice with Cheney.

What an unpleasant and grubby little film this is. Perhaps times and attitudes have changed since the 1980's but to make such capital out of Gary Hart's regretted infidelity is just scraping a barrel. It led to America losing a likely President, hypocrites rule!

It’s interesting to see Jason Reitman’s film targeting the scandal surrounding political candidate Gary Hart. There’s a throwback appeal to how the film proceeds with a procedural quality I recall from many made-for-TV movies of true stories, built to hit just enough dramatic notes to be compelling enough for television. The film is elevated slightly by the exceptional casting but they’re expected to pull double duty in a film that doesn’t give them any juicy scenes to chomp on as deeply.

Hugh Jackman is an iffy choice to play American Senator Gary Hart but he slips quite comfortably into the role of a typical politician with a sadly typical scandal. During the late 1980s, he hit the campaign trail to make his way to the White House. While his wife Lee (Vera Farmiga) stays behind, Gary is drowned in political strategies of who to meet and where to go, with his campaign manager Bill Dixon (J. K. Simmons) looming over tough calls. One stipulation that causes contention is deciding whether or not to attend a BBQ.

But Gary has a problem with his emotions. When he addresses one reporter who asks cautiously about Hart’s past infidelity, he explodes on the press. Insisting he has nothing to hide, he bitterly invites the press to follow him around while he’s not campaigning to know just how boring and devoted he is to his campaign and his wife. Well, the press does just that and during a stakeout discover that Gary is having an affair. This is a bombshell of discovery and it is not going to end well for him. He tries to deflect to talking about the issues but he has no choice. He must address these allegations and eventually does so with a bite that has too much bark.

While there are some great casting choices here of accomplished and attention-garnering actors, including Bill Burr as the Miami Herald reporter who busts the story wide open, most are stuck within obligatory scenes where they’re wound too tight. Vera Farmiga delivers that tone of disappointment in a wife wronged who wants to let her husband stew in his mess for a bit. Mamoudou Athie especially shines on the screen as a Washington Post reporter devoted to asking the tough questions even he doesn’t feel as compelled to ask for fears of sliding into tabloid journalism. Alfred Molina plays the Washington Post editor about as well as he’s played any role.

But this is a problem with the picture. Throughout the picture, we’re mostly just watching the actors and their performances, never fully grasping the emotional weight of Gary Hart’s downfall. In fact, from the very first shot, we’re shoved into the media circus and focusing more on the little details than the bigger picture. Some of the first dialogue we hear is from television crews bickering over camera shots. Most of the conversations are in stuffy rooms of campaign strategy and how to publish the big scoop. In terms of placing us within the media coverage of it all, the film does a good job placing us in that environment but rarely gives us a more personal and relatable edge. For adults of this era, I can only imagine seeing a film such as this would be more familiar than intriguing.

The Front Runner has some great acting and interesting moments but ultimately falls back on easy scenes with such a story. For what could’ve been an Oscar contender instead takes a route similar to Hart; showing lots of promise but never quite making it to the finals.