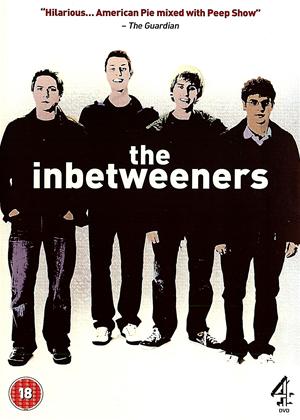 Synopsis:
'The Inbetweeners' is the painfully funny hit new comedy from E4 about four teenagers growing up in suburbia. Will McKenzie is on a bad run. His parents have just divorced and, to make matters worse, his mum has moved him from a posh school into the sixth form at the local comprehensive. Despite the twin handicaps of being the new kid and carrying 'an actual briefcase', Will quickly makes new friends - Simon, Neil and Jay. Unfortunately, they are far from the coolest kids at school. Together they attempt to navigate the perils of sixth form life while trying to make girls, like the gorgeous Carli D'Amato, 'notice them for who they really are'. Which is a bad move, because they are idiots.
Over the course of their term alone, the boys roll call of dishonour includes; accidentally hitting a disabled girl in the face with a Frisbee, drunkenly puking on a seven year old child, gate crashing a funeral cortege in Simon's tiny, bright yellow car, and calling Neil's dad a 'bumder'.
Actors:
Simon Bird, James Buckley, Blake Harrison, Joe Thomas, Henry Lloyd-Hughes, Anabel Barnston, John Seaward, Greg Davies, Richard Hart, Emily Head, Belinda Stewart-Wilson, Alex MacQueen, Robin Weaver, Andrew Brooke, Tim Faraday, Ollie Holme, Nigel Boyle, Emily Atack, Suzi Battersby, Justine Cain
Directors:
Gordon Anderson
Studio:
Channel 4
Genres:
British TV, TV Comedies
Countries:
UK

Reviews (3) of The Inbetweeners: Series 1

Although crude in parts. It is a harmless look at teenage boys with nothing more on their minds than the usual! There some really 'squirmy' moments. On the whole a pretty good laugh.

If you are a teenager/twenteenager, then you'll probably find this hilarious and think it's so originally funny in its cartoonish capers and crudeness. For anyone who left school before the 21st century, however, and does not find people talking about sex that interesting or funny, it's rather predictable - though funny in parts. What struck me about is was just how unbelievably old-fashioned it is - all those japes and capers make it like a 21st century Just William or St Trinian's - and how unbelievably unbelievable. It's about as true to real life as Grange Hill too! The 17 year olds all look 20; they all live is massive houses in the home counties, and yet go to the local sink comprehensive (yeah, right!). Its stupidity is sometimes offensive though - and it scores points off laughing at poor people: poor is the new black for 12 year old E4 comedy commissioners eh? So let's all laugh at poor people! Ha ha ha... In that case, why not laugh at black people or disabled people too? Oh no, can't do that - so who can we laugh at? THE POOR! Brilliant! Really glad I paid my licence fee now (Channel 4 is partly funded by it). All TV channels are desperate for younger viewers - and so online-friendly bitesize crude conedies like this tick all their boxes.

(BTW This series is co-written by the son of an established TV writer too (beesly) - so I bet he really had to work, like, really hard for that commission! I'm guessing he is not poor either, but enjoys laughing at poor people - no wonder he is doing so well at Channel 4...)

All in all then, this will give occasional laughs but it is nowhere near as funny or radical or inventive as it thinks it is. Much copying of other comedies of embarrassment is obvious. I watched the whole thing in one go - 6 episodes - and it passed an evening pleasantly enough: not special, or all that funny, but watchable. 3 stars.

The Inbetweeners is another smash comedy from the home of this sort of programme E4. I dont know how E4 does it but they churn out some great shows like Misfits,Skins and The Inbetweeners. Think American pie-The Series set in england and your halfway there!! 4 hapless students take us on their riotous journey of sexual escapades and shenaningans in the 6th form of normal comprehensive secondary school. The language is full on, so it is an 18 cert for a reason! How some of it got by the censors for tv broadcast is baffling Lol!. Anyone who is human and male can indentify with the themes in The Inbetweeners as they are the sort of experiences every teenage boy goes through when growing up. The cast is excellent especially loudmouth jay (james buckley) and the completely geeky will ( simon bird) You'll be splitting your sides most of the time and the writing is excellent. It's no surprise that the show has been up for a slew of awards over the last year or so and only missed out to Gavin and Stacey which in my opinion isn't that funny.

Rent this and series 2 together and you'll have a great time. Series 3 should be airing late 2010.