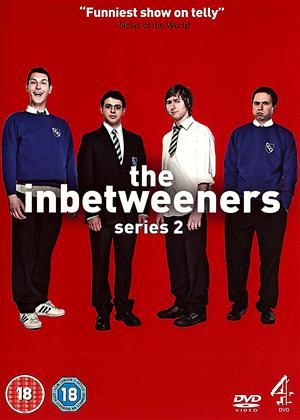 Synopsis:
The Inbetweeners are back for a new term and in Will’s head things are going to be very different for the four boys this year. In reality the only thing that has changed is that they are now even less cool thanks to various disasters involving the Swanage field trip, their work experience and Will’s birthday. But has it been all bad? Well, yes pretty much. Will’s birthday ended with him being chased by a bloke with a cricket bat, Jay was caught enjoying himself at an old people’s home, Simon hot beaten up by a twelve year old and Neil punched a fish to death. It’s been an interesting term.
Actors:
Simon Bird, James Buckley, Blake Harrison, Joe Thomas, Emily Head, Waen Shepherd, Henry Lloyd-Hughes, Greg Davies, John Seaward, Jayne Wisener, Kali Peacock, Richard Hart, Jean Reeve, Charlie Wernham, Scott McNess, Emily Atack, Cavan Clerkin, David Fynn, Adam G. Goodwin, David Schaal
Directors:
Gordon Anderson
Studio:
Channel 4
Genres:
British TV, TV Comedies
Countries:
UK

Reviews (1) of The Inbetweeners: Series 2

More comic cartoon capers from the boys... - The Inbetweeners: Series 2 review by PV

But it works. Why? Because there are some genuinely funny moments are funny lines; also, the characters are clearly differentiated - the usual way of doing this on TV is to add black, female or Scottish characters, so well done for the writers for sticking to the 4 white guys: the parent character (Will) and the three children Jay, Si, and Neil.

I laughed out loud at the boating episode and also the London nightclub one. Some others are less funny and can be overly farcical and cartoonish. However, compared to the usual girly soapy dross on TV like Waterloo Road and practically all other drama, this is actually entertaining and funny! Masturbatory and scatalogical language abound - but actually there is far less swearing on here than on many other shows approved for a younger audience. No F wortds. The 18 certificate is absurd really.

This is better than series 1 too - and the habit of laughing at poor people has been dropped, thankfully (that was probably desperation for laughs in series 1). Every episode is essentially the same: the boys have a plan to get girls that goes horribly wrong. But hey, every episode of Sherlock Holmes follows the same format too, so why not?

I LOVED the episode about Si in trainers being refused entry to a nightclub... Ah the memories...