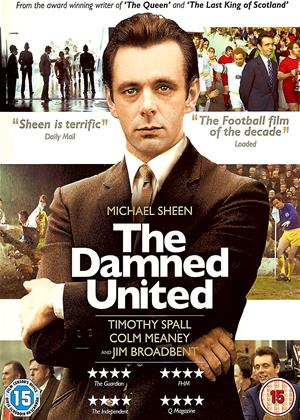 Reviews (2) of The Damned United

For Football Fans Only - The Damned United review by CP Customer

Michael Sheen delivers another candid performance, this time as the unstoppable force that was Brian Clough. An iconic figure in football, this film focuses on the rivalry between his own brand of football and the physical approach that was Leeds United. Tables are turned when Clough becomes the manager of his biggest rival and then endures a dramatically short period in charge. These events are no surprise to football connoisseurs, thankfully there is little on pitch action and the blend of historical footage works well. The 70’s has been faithfully recreated, but this is a film about the clash of Revie and Clough. The Damned United is an interesting snapshot of a bygone period, when football managers said what they thought openly. The extras look at capturing the essence of Brian and remembering him today. The film fails to cross boundaries and will only entertain those with memories of Cloughie or the football era.

I've always been dissapointed with football films, they usually follow the cliche of the unlikely giant killers honed to winning excellence by a saintly guru, after spending £3.60 and a dozen mars bars.

This however is a fictional account of a very short period (44 days) in the life of one of the most brilliant (and arrogant) men ever to grace English football, Brian Clough.

Martin Sheens performance as Clough is a real stand out, capturing both his arrogance and his humanity, although Colm Meaney (as Don Revie) almost steals the show.

You dont have to be a football fan to enjoy this, it's an outstanding insight into a complex man, told at times almost as a rugged love story for a game that dominates so many lives.