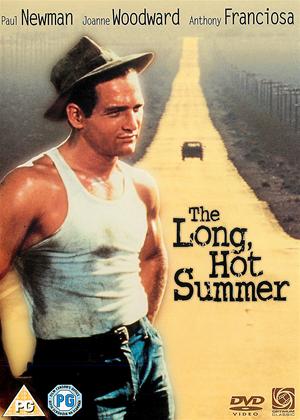 Reviews (1) of The Long Hot Summer

One of many fifties southern dramas made in the image of Tennessee Williams' 1955 play Cat on a Hot Tin Roof, and influenced by/adapted from by his work in general. These films developed archetypes which would make them into a sub-genre. There was the photogenic drifter usually played by a graduate of the Actors' Studio, an ailing, corpulent patriarch obsessed with legacy, a cerebral, inhibited (but still beautiful) ice-maiden and a hot, earthy coquette. Probably there will be contact with the sickly remnant of the southern aristocracy.

All these are present in The Long, Hot Summer, which was freely adapted from southern laureate William Faulkner. These film are works of atmosphere, with a soundtrack of orchestral music (here by Alex North) and the chirping of crickets, beautiful rich colours and locations which facilitated the expanses of cinemascope. Usually you can add the cry of a lonesome steam train, though here it is a paddle-steamer.

Paul Newman is terrifically charismatic as the ambitious, mysterious interloper, ingratiating himself into the secrets and lies of a family of rich southern cotton planters and romancing repressed schoolteacher Joanne Woodward. Lee Remick makes an impact as the sexy, manipulative siren married to the shiftless son of Orson Welles' overbearing patriarch.

The main negative is the awful performance from the hugely overweight Welles. It is claimed that he was so repulsed by the method actors in the cast that he mumbled his lines as a sendup. Whatever, he is unintelligible. But I just really like this kind of film, full of poetic, philosophical dialogue and obsessed with sex. Martin Ritt, who was Elia Kazan's deputy at the Actors' Studio, does a good job with the cast (except Welles...) and the film has a wonderfully rich, dreamy ambience.