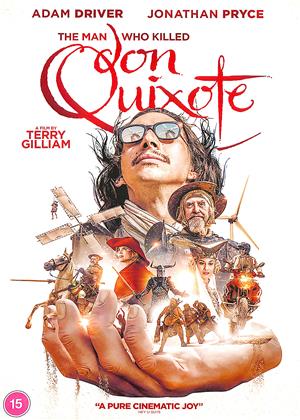 Rent other films like The Man Who Killed Don Quixote

Reviews of The Man Who Killed Don Quixote

In the early 2000s, Terry Gilliam attempted to film his surreal fantasy of Don Quixote. As seen in the documentary film Lost in La Mancha, the project did not go well. The location became an issue as soaring planes ruined the sound and rain created mud that made equipment hard to move. Actors suffered accidents and were unable to perform to their full potential. Errors were made with the crew, pushing production back even further. The movie became such a disaster during its production that the financers eventually pulled the plug on the project. Many years later, Gilliam went back to fighting for his film and was able to get through a production that eventually wrapped. One long legal battle later, The Man Who Killed Don Quixote is finished after 25 years in hell.

It’s just unfortunate that after all that time the film turns out to be fairly predictable in Gilliam’s own weird and surrealist ways of conceiving stories of madness. Adam Driver plays the downer director Toby, currently working on a commercial inspired by the tale of Don Quixote. He once had big dreams of making movies and now finds himself drowning in troubling productions and sleeping around with the wives of people he works with. There’s a gap of unfulfillment in his life that desperately needs to be filled. Consider how he halts sex with a woman during foreplay to take a gander at his old film. He needs some artistic inspiration ASAP.

What he gets is a magical transportation to a surreal world where he is mistaken for Sancho Panza. At first, he believes his production is starting to improve when his Don Quixote actor (José Luis Ferrer) starts getting more into the role. Then he starts wondering if he’s just dreaming how he wants this shoot to go. Then it’s starting look like maybe he truly is in the age of Don Quixote. Or is this a dream? It seems like a different era but there are still production crews and security people present? What is real anymore?

The film essentially does what most of Gilliam’s movies do with their troubled protagonists; kick them down a confusing hole and watch them frustratingly try to find their way out while whacked out on drugs. There’s certainly a more meta approach this time around for focusing on the madness of a filmmaker, the amount that bled over from the original production of this film is debatable. On this level, the film feels most genuine, where the viewer can feel that same level of crazy to some degree the way Gilliam often drives himself mad. There’s a certain empathy reached within this filmmaking that is almost as admirable as it is frustrating to comprehend.

Per Gilliam’s style, there’s plenty of beautiful visuals coupled with a great sense of character locked within the cerebral structure. Off and on the film continued to bring me in and out of its world, often daring me to ask the questions of what is a reality and what is a dream. The blurring of this perception can be a fun aspect, as many of Satoshi Kon’s film have illustrated well. But when I find myself more questioning the structure than enjoying the grander sense of character and mind-bending aspects, it’s a bit tough to just enjoy the rousing ride of dutch angles and dream-like flow. The Man Who Killed Don Quixote is not the film that killed Gilliam, having been made, but it’s certainly not the masterpiece for such time on an opus as one may think.