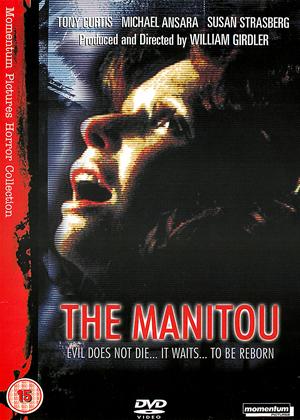 Synopsis:
Karen Tandy (Susan Strasberg) enters a San Francisco hospital suffering from a growing tumor on her back. The doctors think it's a living creature, a fetus is being born inside the tumor. Fortune teller Harry Erskine (Tony Curtis) says it's nothing until his client starts to speak strange languages, and kills herself by falling down a flight of stairs. Erskine must find a witch doctor who can send the evil spirit back to where it came from, but will it take over before they can send it back?
Actors:
Tony Curtis, Susan Strasberg, Michael Ansara, Stella Stevens, Jon Cedar, Ann Sothern, Burgess Meredith, Paul Mantee, Jeanette Nolan, Lurene Tuttle, Hugh Corcoran, Ann Newman-Mantee, Jan Heininger, Michael Laren, Cindy Stanford
Directors:
William Girdler
Producers:
William Girdler
Writers:
Graham Masterton, William Girdler, Jon Cedar, Thomas Pope
Studio:
Momentum Pictures
Genres:
Drama, Horror

Reviews (1) of The Manitou

By any normal standards, this is an absolutely dreadful film. Like such misfires as John Carpenter's "Prince of Darkness" and John Boorman's "Exorcist II: the Heretic", it tries to combine modern technology (well, modern for 1978 - just look at the size of that computer!) with ancient magic, and fails dismally. But it does so in such a bonkers fashion that, viewed as an accidental comedy, it's genuinely entertaining in ways its makers never intended. Burgess Meredith, who pops up briefly and unnecessarily, certainly appears to think he's in a comedy. And Tony Curtis, whose career must have been in real trouble in the late seventies for him to end up in nonsense like this, sometimes casually holds his hand in such a way as to partly cover his mouth and avoids looking at the camera, just like an experienced actor concealing the fact that he's trying not to laugh.

As well he might. In a strange mash-up of "The Exorcist" and "How to Get Ahead in Advertising", Tony's girlfriend has a supernatural fetus gestating in her neck. As you do. Placed in the ironic predicament of being a fake psychic who discovers that all the medieval bollocks he pretends to believe in is literally true and then some, our hero, in the face of such escalating absurdities as old ladies levitating for no reason at all and a demonically possessed surgical laser (apparently in 1978 American hospitals routinely performed operations with that device Goldfinger nearly used to castrate James Bond), must seek the help of a good Native American shaman to defeat the bad Native American shaman trying to reincarnate as a malignant midget who, amongst other totally random superpowers, can create arctic weather conditions inside buildings, conjure up giant transparent iguanas, and open magic gateways to outer space. Which of course leads to a "Star Trek" phaser battle between a psychedelic light show that, we are somewhat implausibly told, is Satan, and, standing in for the starship Enterprise, a nude woman.

Seriously, all of the above and more really does happen! If it wasn't for too many slow bits it would be a true anti-masterpiece, and even with them, it's genuinely so bad it's good, if you like that sort of thing. I do, and I rather liked this. Even if you don't, you'll have to admit that it's not quite like anything else you've ever seen. Especially not anything else starring Tony Curtis.