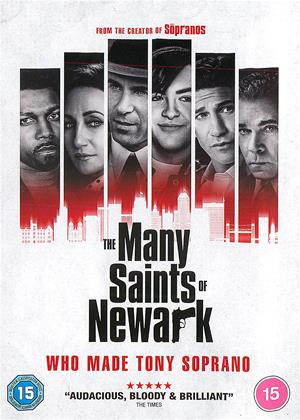 Rent other films like The Many Saints of Newark

Reviews (2) of The Many Saints of Newark

Slow and dull - The Many Saints of Newark review by cr

I loved the sopranos and watched it all a few years ago. This however is s trip down memory lane that few will be interested in. A bit like the suicide club you can't get over the impression of whats the point? It wasn't wanted or needed. Its so slow and full of unoriginal ideas and scenes are set up to remind you of better films. Not impressed.

I saw great reviews for this from critics, all 4 stars of 5 or more. But then critics are the vainest people ever and desperate to fit in an conform to whatever the on trend view is, and these days fawning over any film which features African American stories as this does, set against 1967 civil rights movement and early 70s. BLM has a lot to answer for - I wonder how this might have looked if made 3-4 years earlier.

Anyway it is all very episodic, with expected violent scenes and people getting 'whacked', but is very bitty and fragmented, with civil rights issues shoe-horned in, I think. Watch Peaky Blinders to see gang warfare done with Jewish gangs and others.

Told from POV of Christopher and focusing on his father and grandfather rather than a child and teenage Tony Soprano - the film tries to explain his personality and backstory as we all know the man he became.

As we know, James Gandolfini died of a heart attach in Rome aged 51 in 2013. His 14 year old son found him slumped in the hotel room in room, That son is Michael Gandolfini who was 20 when he brilliantly played the teenage Tony Soprano here. One to watch for the future, he is. Some funny scenes too, at school, with the usual personality tests showing what he may become, and a hilarious scene with a dog and Christopher as a baby (remember Tony choked him to death after a car crash in the series - no spoilers - it mentions this in the first scene of the film and is in the Sopranos series). A bit Omen-mystical but funny. Tony is a man to be wary of, even as a boy or teen.

No spoilers but when it all ends with a MEH one is left wondering if one can remember any of the film. I have forgotten most of it already and I only watched it yesterday. I looked up some of the Italian-American slang on the internet (there are sites) which was as illuminating as it was hilarious, I do rather suspect the N word was toned down a great deal from what real Italian-Americans like these would have said in the late 60s and early 70s. So not really realism at all. Very mild racial swearing mostly. Some new words on me too, and the hilarious insults the gangstas use - esp 'your sister's C' - had me laughing every time.

An interesting curiosity piece like the Breaking Bad movie spin--off and equally forgettable.

My advice: watch the TV drama series of the Sopranos instead - then you can see some characters younger in this like Junior etc. Maybe enjoy this as you might an extra slice of cake after that main meal - which you do not really want but feel you have to eat because everybody else is.

I came into this prequel to The Sopranos fairly cold. It’d been years since I watched the mafia drama series but I figured that I wouldn’t need much foreknowledge since it takes place before the events of the series. I doubt there’s anything as trippy as a Fire Walk With Me element that requires a viewing of the TV series again. Though the reaction from many of the fans seems to stress that case, I must admit that this picture was relatively easy to follow. I don’t think I’m missing much by catching every wink and nod to the show.

As it stands, however, the prequel feels more like a meandering mafia story that has a handful of good scenes. The story takes place during the late 1960s when Tony Soprano was a mere boy. He stays with his Uncle Dickie Moltisanti (Alessandro Nivola) who is eager to introduce Tony to his father, "Hollywood Dick" Moltisanti. The reunion is joyous and there’s even a wedding to celebrate. But all is not well in the Moltisanti. Dick has returned from Italy with a wife, Giuseppina, who he constantly abuses while she struggles to find her place in America.

Dickie, desiring to be a better person and not be as brutal as his dad, decides to take the initiative and stop his father’s violent cycle. In doing so, however, he ends up murder his own father. The murder is hidden and framed to be a casualty of the ongoing race riots in New York City. Present during these riots is Harold McBrayer, a black associate of Dickie who, much like Giuseppina, is aiming to make a name for himself.

As the story progresses into the 1970s as characters are deceived, incarcerated, shot, and beaten, there’s a longing throughout to be something more. A teenage Tony (Michael Gandolfini) so desperately doesn’t want to be like his family, bound by crime and deception with relationships doomed to fail. Dickie wants to have a relationship with Giuseppina but fears that he is losing his grip. Harold aims to jump more into the mafia game as white flight begins but questions just how far to go only briefly in the haze where African-Americans didn’t have much time to consider a revolution. Johnny Soprano can feel his cultural influence dwindle as the first thing he complains about after getting released from prison is that black people have moved into his neighborhood.

Even for not having seen the show in quite some time, the film is framed in a way to take note of a few characters who are more present for notoriety than anything else. A far younger Junior Soprano is present but don’t expect him to do much. Other notable names filling out the background include younger versions of Paulie Walnuts, Silvio Dante, Christopher Moltisanti, and Pussy Bonpensiero. And unless you’re really that interested in the case of when Tony met Janice, there’s not much to these inclusions.

The Many Saints of Newark feels a lot less like a movie in this regard and more like a handful of episodes stitched together in a montage. There are some great moments of questioning crime and the racism of the era, complete with meaningful monologues about death and fearing the future. That being said, these elements have a sensation akin to a best-of album of great crime movie moments, delivered in solid yet rarely compelling moments. As a companion piece to The Sopranos, it’s fine but won’t amount to much else.