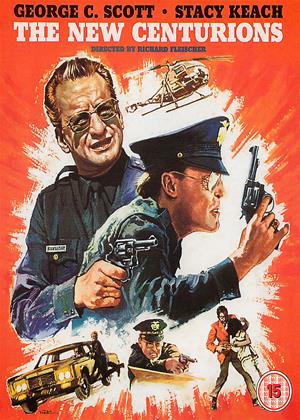 Synopsis:
Young Roy Fehler (Stacy Keach) joins the Los Angeles Police Department to see him through until he completes his degree in law. He has the good fortune to be partnered with venerable and respected officer Kilvinski (George C. Scott) and they quickly establish a good working relationship thanks to Roy's willingness to learn and Kilvinski's ability to teach him. Roy becomes so involved in his work in fact that his studies as well as his family begin to drift away from him. With his life hanging by a thread, his mentor retires from the force and Fehler is left with nothing but the drink he turns to.
Eventually Roy starts to take control of his life again, but as he knows all too well it's not always so easy.
Actors:
George C. Scott, Stacy Keach, Jane Alexander, Scott Wilson, Rosalind Cash, Erik Estrada, Clifton James, Richard E. Kalk, James Sikking, Beverly Hope Atkinson, Mittie Lawrence, Isabel Sanford, Carol Speed, Tracee Lyles, Burke Byrnes, William Atherton, Peter De Anda, Ed Lauter, Dolph Sweet, Stefan Gierasch
Directors:
Richard Fleischer
Producers:
Robert Chartoff, Irwin Winkler
Writers:
Stirling Silliphant, Joseph Wambaugh
Studio:
Powerhouse Films
Genres:
Action & Adventure, Classics, Drama, Thrillers

Reviews (1) of The New Centurions

Stacy Keach is one of those actors who, like Robert Shaw, is mainly remembered today as a cliché seventies tough guy, but was actually a pretty good actor with a wider range than people nowadays give him credit for. Here he gets to display quite a bit of that range as a cop who, being cleverer than most of his colleagues because initially he just takes the job to pay his way through law school, has far more insight than you might expect into the ethical grey areas he inevitably finds himself in, and sometimes struggles with the morality of what he does, and the emotional demands it makes on him. Though his soul-searching is never allowed to get in the way of the action, which is realistically small-scale and infrequent, with much more tension arising from the possibility that shooting may break out at any moment than actual shooting.

This film is at its best when it's at its most serious. Gun violence is never glorified in the slightest. When the bullets fly, innocent people who happen to be in the wrong place at the wrong time are just as likely to die as the bad guys. And when our hero's inexperience causes him to make a serious error of judgement, the near-fatal wound he receives, which fortunately we only glimpse, is one of the nastiest things you're ever likely to see in a movie made this long ago.

Where it falls down a bit is its bizarrely uneven tone, which obviously influenced the next generation of cop dramas, such as "Hill Street Blues". One moment it's "French Connection"-style grimness, and the next, we're rather patronizingly being offered a bit of light relief, sometimes involving characters too weird to be believable, especially in an otherwise extremely serious movie. In particular, a scene in which numerous vice squad detectives overpower and arrest a gay man for soliciting is meant to show us how conflicted the hero is about having to arrest harmless people for doing things that shouldn't be illegal. But we only understand this when he explains it afterwards to his wife. The scene itself plays out as comedy, revolving around the hero's embarrassment at having to pretend to be homosexual, and the fact that the gay man they're trying to arrest is, in contrast to the usual "fairy" stereotype, absolutely enormous, and takes so much arresting that everybody falls in a pond.

However, it's gripping, tense, and sometimes moving, except when it's unfortunately trying to be funny, and both George C. Scott and Stacy Keach give fine performances (except for Keach's drunk acting - very few actors can convincingly act drunk, and he isn't one of them). I would have liked to see some of the supporting cast developed a bit more, but apart from these flaws, it's overall a pretty good film in which plenty happens, even if it's a bit dated, and its embryonic 1972 version of political correctness still has a long way to go.