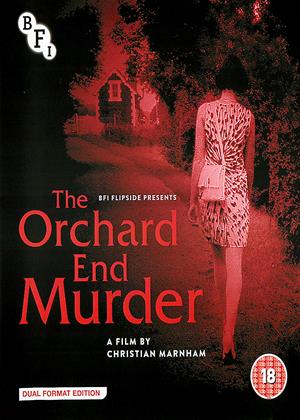 Reviews (1) of The Orchard End Murder

Apples were harmed in the making of this film. Such a note could have been included in the credits of Orchard at Murder End (1981). That might sound a frivolous comment to make of something which turns around murder by strangulation but this fifty-minute drama - mostly set in 1966, as summer ends, in the vicinity of a cricket match in an idyllic Kent - was intendedly lightly.

Written and directed by Christian Marnham, who had shunned his family's farming life for one as film editor who turned to commercials, it was made on a minimal budget and found continuing life as the second feature when various all-out gory films worked their way round the circuits. Its title means that one is not giving anything away: Tracey Hyde (best known for Melody), in a Louise Brooks hairstyle and a splendid black-and-white dress, agrees to go with a fellow in a sports car to the village where he is in the cricket team. Their only previous meeting was to neck in a car park. She is keen for more, and is chagrined when a romp in a field is broken off so that he meet his destiny on the pitch.

Taking the hump instead of a hump, she wanders about, and chances upon the cottage of a stationmaster (Bill Wallis) whose garden gnomes so attract her attention that she accepts an invitation to tea by a man whose oddness is outdone by that of his handsome lodger: Clive Mantle in a first appearance which heralded a prolific television career.

Suffice to say that while strolling in the orchard she succumbs to a deep kiss but shies from more, the price for which is death upon a huge heap of surplus fruit.

To adapt the Song of Songs, this is discomfort me with apples. It is simultaneously grim and yet unreal (the murder was filmed at eighteen frames a second to bring out the jerkiness of such a death). Within this short film there is much going on, it is as absorbing as it is unsettling: a glowing England with autumn imminent.

The British Film Institute's DVD comes with droll interviews, including one in which Tracey Hyde makes light of long submersion, her naked body pressed against the apples with, out of shot, a drainpipe attached to her face for air. Such was life before computer-generated imagery.