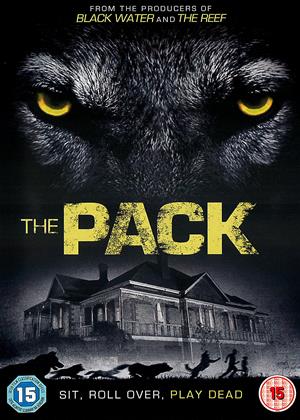 Synopsis:
On a remote farm in Southern Australia, hardened farmer Adam Wilson, discovers the last of his livestock have been mauled to death by a pack of wild dogs. His dreams of keeping the family business going are shattered, but nothing can prepare him for what will happen next. As night falls the feral pack of dogs begin to circle the farmhouse. With a taste for fresh blood, they launch their attack, stopping at nothing to get inside the house. Will Adam and his family make it out alive? Or will they fall victim to...The Pack!
Actors:
Katie Moore, Anna Lise Phillips, Jack Campbell, Hamish Phillips, Kieran Thomas McNamara, Charles Mayer
Directors:
Nick Robertson
Producers:
Michael Robertson, Kent Smith
Writers:
Evan Randall Green
Studio:
Arrow Films
Genres:
Horror, Thrillers
Countries:
Australia

It’s not always possible, but I try to watch films blind, without knowing anything about them. For a long time, there was no dialogue in ‘The Pack’ and I was trying to identify the location. At first, I seemed sure it was America, then Britain and finally – when characters begun to speak – Australia.

Wild dogs are notoriously difficult to get right. Several otherwise worthwhile adaptions of ‘Hound of the Baskervilles’ have been somewhat let down by their depiction of the titular mutt. Here, effects are only slightly awkward. A mixture of quick glimpses of slavering jaws, crimson splattering, what I suspect to be a puppet and scampering mongrels do a good job convincing, except when you see the sleek and happy complete animal, darting uninjured out of shot after an attack, it is clear that ‘no animals were harmed (or stressed) during production’. And quite right too, of course.

The acting throughout is top-notch, from the first victim of the pack (an unctuous money-lender) to the occasionally brattish but well-rounded juveniles. The story-line of a likeable couple, Adam and Carla Wilson (Jack Campbell and Anna Lise Phillips) with money troubles under siege in their own house by a pack of blood-thirsty canines is treated seriously and directed with real flourish by Nick Robertson. Campbell may overdo the rugged deep voice thing, but he provides a solid character.

It is true to say that once the ‘siege’ was underway, the interesting elements of the build-up became more standard, and the excellent actors were somewhat reduced to reacting to the attacks. But that is the way it goes, and there were several moments of genuine tension.

What a load of bullsh!!!! this film is. I have just read the other review and now I am wondering if NP is all there. The story line is sooooo boring and the actors both young and old are just CRAP!!! The story is predictable and unplausible. How the hell did the dog get into the house?????? If you want to see a good dog movie rent Cujo its a thousand times better than this garbage.