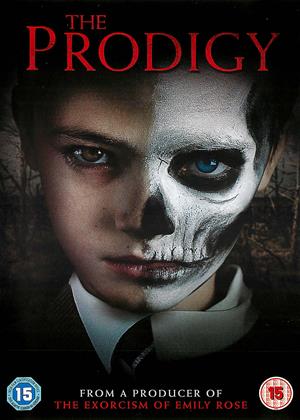 Reviews (1) of The Prodigy

Prodigy ? - The Prodigy review by porky

Prodigy didnt seem to me to be the Correct Title for this .

This was Far Better than I was expecting . I really enjoyed it .

The Prodigy (aka Descendant) review by Mark McPherson - Cinema Paradiso

In early 2018, I watched a film called Prodigy, the tale of a deadly child with unnatural powers that can kill people. One year later, I’m watching The Prodigy, a film that is more about possession than powers but the general premise is the same. It’s a classic horror method of the killer being a kid that relies on the fears of a parent having to commit the troubling action of killing their child who kills others.

There’s little mystery within the film’s premise. Two scenes are shown occurring at the same time. A killer has failed in fully killing a woman and is gunned down by the police while carrying a human hand, which I’m sure carries a tasteless joke about him being armed. At the same time, a baby is born in a hospital to Sarah (Taylor Schilling) and John Blume (Peter Mooney). As time goes by, their son Miles begins exhibiting signs of early intelligence. He’s speaking earlier than expected and soon showcases a great sense of intelligence, leading to the older Miles (Jackson Robert Scott) being enrolled in a school for the gifted.

But Miles is not well, made most evident from a scene where he finds a bug and crushes it. Sure, everybody kills bugs, but he made a real mean face while doing it with a nasty crunching sound. Then the more horror like tendencies take root, where he lays a deadly trap for a babysitter and hides the dead body of the family dog. But Miles has no memory of any of this. Is it even a spoiler at this point to mention that Miles is being possessed by that spirit of a serial killer who hasn’t finished his work on Earth? Maybe it is but there’s no great build-up to this surprise and the execution still falls back on cheap cliches.

There are plenty of scenes where Miles is required to be terrified and evil, mentioning to his mother that he’s afraid of his memory loss and later staring upward with a low voice when becoming the killer. There are some stabbings here and there as well as some creepy visions, not to mention a very uncomfortable scene where a doctor attempting to extract the killer’s soul is threatened by the killer into not saying a word after being threatened with a false accusation of sexual molestation. The details the killer goes toward to make this a viable option is more disturbing than the scene where he makes the kid stab his dad with garden shears.

There is one scene in particular that is brilliantly assembled. In a nightmare sequence, Sarah imagines her child running to her in a dark hallway. When her running son disappears into the shadows near her, dropping below the screen, the killer ascends in front of Sarah, making for the greatest jumpscare I’ve had in quite some time. I wish I could give the rest of the film some credit for being just as creative but everything else is so by-the-book of the creepy kid genre of horror.

I know I relate this analogy to a lot of lackluster films but The Prodigy, more than any film I’ve seen in the past few years, is doomed to be confused and lost in the mundanity of its premise and name. Like I said, there have already been two films both named Prodigy within a year of each other, both involving evil kids and certainly due to be shoved tightly into the Omen rip-off bin.