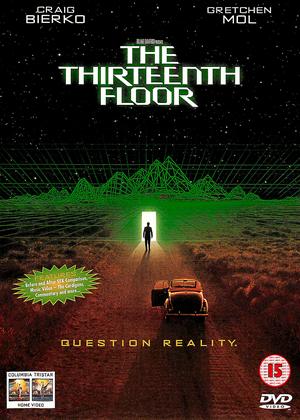 Reviews (2) of The Thirteenth Floor

Its just bobbins - The Thirteenth Floor review by Drumhum

I imagine this film to be the result of a bunch of well connected "media types" having too many wines one night coming up with a well hackneyed "sci-fi" idea. They gathered together a good film budget due to their great connections, hired good crafts people (it does look good) and generally followed the book on "how to make a high budget film".

So they did it right? No!

The end result is inordinately mediocre. It feels like it was made by committee and lacks the strong focussed vision of the better (director lead) films.

My observation was confirmed when I listened to a bit of the directors commentary. There was clearly a lot of re-shooting and changes made due to their findings from focus groups and test screenings.

The "hero" is two dimensional. Tall dark and handsome in true hollywood fashion, but lacking any sort of distinction or character. He has no flaw or significant "special feature" that the poor actor could exploit. The only thing going for him is his dress sense.

Most films go through some sort of market research or testing process of course but simply pandering to the findings regardless, just result in this sort of pap.

The script is terrible in places. I kid you not, this is some dialogue....

"I fell in love with you"

"You don't even know me"

"Yes I do. I've watched you: Your kindness, your dignity... I fell in love with you even before I met you"

"How can you love me? I'm not even real. You can't fall in love with a dream."

Yes folks its bad and not in a funny way.

The thing that irritates me is that it could have been so much better. There is just some sort of talent missing in the making of this film. A great shame.

Really, this really was a waste of time - there are far better films to spend a tiny bit of your life on.

I guess if you feel like watching something completely lightweight, then you might like it, but then such viewers rarely want the complicated aspect of virtual reality and what exactly defines "true life" to wrestle with.

Its like an extended episode of E.R. with a bit of Star-Treck (TV) thrown in. Its not exactly terrible viewing but surely movies are supposed to be, well, different to average tv?

Oh and for those that compare this to the Matrix... oh god, I've spent long enough on this film as it is to got there.

The plot of 'The Thirteenth Floor' tells the story of a genius like computer programmer named Hannon Fuller who discovers a way of travelling to another time via an advanced virtual reality system. The user is linked up to a computer which transports them to 1930's Los Angeles, with a realism so great that the participant soon believes they are actually living within that time period. While the system is still in its test phase Fuller is mysteriously killed, seemingly by someone that he knows, and when his business partner Douglas Hall is left in charge of the project he soon discovers that Fuller seems to have left clues to his killer's identity back in the computers 1930's simulation. Himself considered a suspect of Fuller's killing, Douglas must go into the virtual world to unravel an ever evolving mystery. Overall, this is a smart sci-fi thriller, well acted, directed and with some very clever subtle special effects. The plotline at times is complex, so if you're not paying attention it's very easy to lose your way, but if you enjoy thought provoking thrillers then 'The Thirteenth Floor' is a great choice.