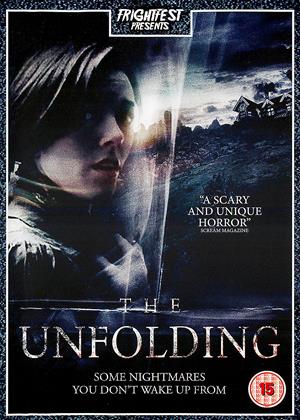 Reviews (1) of The Unfolding

This is another found footage film, where a convincing, likeable young couple stay in a remote house, hear noises at night, get up to investigate and find nothing. It is familiar territory and the frights are sparse, but it’s done so well, making such good use of what is a genuinely creepy Dartmoor location, it provides some good chills.

Tam Burke (Lachlan Nieboer) is a fledgling psychic investigator, and his cheerful, silly girlfriend Rose Ellis (Lisa Kerr) becomes increasingly unnerved by his insistence to stay in the remote country house – and understandably so: when Rose, with tears in her eyes, tells Tam that she wants to go home, we are all with her. To such an extent that we resent both Tam and Harvey Waller (Nick Julian) – a friend who shows up and is initially thought to have caused sinister damage in the kitchen (cutlery attaching itself to the ceiling and walls) – for ensuring that they all stay ‘just another night.’

As events threaten to overwhelm them, experts Professor Chessman (Robert Daws) and medium Muriel Roy (Kitty McGeever, in her last role) open up a dialogue with the spirit, or spirits. Once we have reached this plateau of tension, the film doesn’t quite know how to proceed, it seems to me. And so it stumbles slightly, falling back on shaky camera/screaming/blurring of events to cause familiar audience unease. Also familiar is Rose distancing herself from her friends as she seems to develop a ‘bond’ with whatever spirits are in the house.

I was not sure of the relevance of the seemingly imminent nuclear war, which is broadcast in radio snippets throughout, other than to give the owners of the house a reason to leave (to see their families). Ultimately, it is this background threat that envelopes them all, which somehow over-eggs the plot, and side-lines the carefully built-up supernatural element.