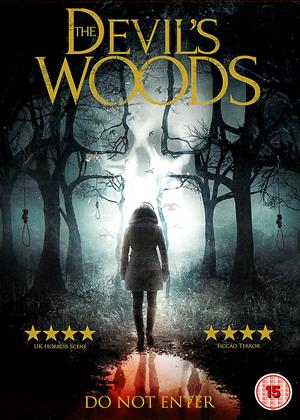 Reviews (1) of The Devil's Woods

I really enjoyed this low budget independent Irish horror. After a gory establishing scene which packs a good twist in its brief pre-credits time, we get to know the group of four young people (Keith, Jen, Jay, and Katie) taking a trip to a music festival. They’re a mischievous bunch – coarse, good humoured and genuinely likeable. Because of this, when they stop in a remote pub and are intimidated by the subtly sinister locals, we are concerned they will come to harm – or gang-raped, as one of their number quips.

This is writer/director Anthony White’s debut full-length film and it’s a good one. Much is made of the verdant scenery and remoteness. The dialogue and acting are persuasive, and even the inevitable sex chat has an amusing edge to it. Nothing hugely new is attempted here, we have ghost stories around the camp-fire to set the scene, slow burning horror atmospherics and a gradual cloud of doom sweeping over the small cast of characters. This is not a criticism – what this film it does, it does very well.

The music by Paul Scott is very raw and effective and helps sell the mood of this rural nightmare, and it is true to say, the brutality and horror is piled up nicely toward the end. Recommended.