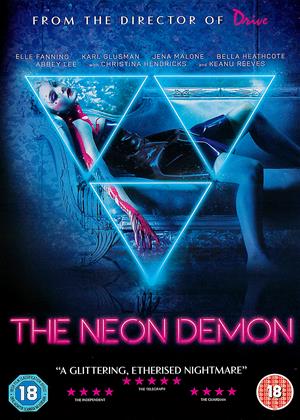 Reviews (6) of The Neon Demon

This is the tale of an innocent model trying to make it in the corrupt big city. Wow! Never seen anything like that before! In the hands of director Nicolas Winding Refn, who brings a sense of ennui to all his films, the result is an intensely irritating viewing experience.

Perhaps it’s the mostly static chest-high camera, or the preponderance of medium close-ups, or the deliberately one-note performances and long silences, or shots held too long, or the lack of anything happening on screen except talking heads.

While not as bottom-numbing as previous Refn efforts such as Valhalla Rising, you feel there could have been so much more here given a director with some cinematic sensibility. It should have been directed by whoever was responsible for the punchy trailer, which shows what the film could have been. As it stands, patience soon runs thin.

An interview with lively star Elle Fanning on the Extras shows what a charismatic heroine she could have made given rein to express an emotion. In the Extras Refn admits to being more interested in the filmmaking process than the results. Maybe therein lies his problem.

One star for the terrific Cliff Martinez electronic score. Forget the movie, watch the trailer and listen to the soundtrack album instead.

Long winded nothing . no build up , no story , no action until the last 5 mins. and by then you really don't care what happens you just want it to finish .

I guess its Most like the movie 'Party Monster ' but without the Party element or the True Story behind it.

Instead of Hedonistic Club Kids you have Vain ,Insecure ,Lesbian Fashion Models , Jealousy and of curse Murder.

As Empty Headed as the Fashion Modes ,this Movie is lacking in every way . Avoid it .

so many sharp cheekbones - The Neon Demon review by MA

This is the story of a nice girl who enters into a nasty town and a dark business: of course, her modelling career is superficially bright white and pink neon. But when Jesse (Ellie Fanning) wanders into a studio photo-shoot, all fairy-tale dress and golden locks, and the Neanderthal photographer Jack (Desmond Harrington) tells her to take off her clothes, the awkwardness is all consuming. She is 16 years old, has been told to tell anyone who asks that she is 19.

Danish director Nicolas Winding Refn takes his time with the atmospherics and gives us plenty of reason to feel for naïve Jesse. Cliff Martinez’s music is very Eighties, very electronic. But where is all this going, I wonder as I watch?

Smiling turns to sneering as other models become increasingly jealous of Jesse’s natural beauty and un-cynical personality. This is a cut-throat, production-line, cattle market catwalk trade. With that leisurely established, events are free to become more and ever more disturbing, gory and surreal. Previously dependable characters reveal themselves to have strange depths and perversions that border on unreality.

This film ultimately could be many things: a comment on the fashion world, the vagaries and obsessions with beauty and perfection, or simply the superficial silliness of human beings. What started as a fairly coherent story slides sideways into weird set pieces rather than going forward in any traditional way. The lack of depth to the characters and plot could be said to mirror the superficial business about which events revolve, or it could be attributed to a project that is more style over substance. It is not easy to categorise, nor is it meant to be, I suspect, but I quite enjoyed it as a horror film along the lines of David Lynch or JG Ballard. It doesn’t need to take so long to tell its story, I think, but the acting is first rate. Keanu Reeves, never a huge favourite of mine, is great as the deeply unpleasant landlord Hank, and Fanning excels as the burgeoning central character.

This is billed as a Horror, but personally I didn't find any horror in it at all. For me this comes across as an Art House film, featuring very pretty and stylish scenes, camera angles and imagery, a very beautifully shot movie, with no depth of story, originality or scariness at all! In reality this is a kind of gothic fairytale, attempting to look in depth at the hypocrisy and backbiting of the fashion industry, set somewhere like Los Angeles, but we're never really told where! Some of the imagery is really quite fantastic, the kind of beauty shots on would find in a glossy fashion magazine and that is what the film portrays quite well, is how essentially shallow and plastic the whole thing is, but the film itself comes across as slightly shallow and artificial too! Very slow paced, the acting is quite good, but the script is minimal and there is no explanation as to who or what the Neon Demon actually is or where the title comes from? For some reason it kept reminding me of 'A Clockwork Orange', that kind of Arty essence which you will either love or hate!

This is so slow that you could go and do other things and pop back now and then and still follow what is (or rather is NOT happening). It's like someone talking to a small child very slowly to make sure they understand. Supposed to be arty, but just patronising! Don't bother - go and watch some paint dry instead.

Nicolas Winding Refn has become a very polarizing director for his works that include the skillfully executed Drive and the meandering nihilism of Only God Forgives. The Neon Demon falls somewhere in the middle as a strange piece of art, horror and satire. It’s a film that has divided critics and audiences. Rotten Tomatoes featured a score of about 50%. The audience at the screening gave feedback after the film about it being “very deep” or “totally stupid.” One consensus can be reached among all viewers: Refn is a brilliantly visual director. Perhaps I’m still caught up in his splendor of challenging cinema, but his tricks still work on me as a director with his own style and tone.

Elle Fanning plays Jesse, an underage aspiring model who finds herself pulled into the scummy world of modelling of Los Angeles. The glitz and glamor of the modeling world begins to take hold of her innocence. She surrounds herself with people in the industry that are interested in her for both money and sex. At the same time, she begins to form enemies with envious women with careers on the line. The higher she rises, the more evil and despised she becomes as she accepts the scummy world that let her inside.

Refn’s portrayal of the ugly modelling scene in Los Angeles border between a dark fantasy and a satire. When Jesse speak with other models and makeup artists, their dialogue is dry, simple and dull. That may be a negative, but I thought about just what would these types of girls have to talk about? They’re not exactly the brightest bulbs and are probably not going to have enough experience to speak about anything else outside of their industry bubble. The mostly wooden acting remains questionable, however, especially in the case of Keanu Reeves who doesn’t come off as convincing as a pedophelic landlord.

But what Refn may lack in making his actors either shine or speak without lengthy pauses, he makes up for it with an undeniable trademark style. He sets up gorgeous shots that exude with color and light, layered with a moody synth soundtrack by Cliff Martinez. He focuses on these shot long enough for us to drink them in and analyze each one. Even when there doesn’t seem to be anything happening on screen, there’s a certain whimsical tension in the air for the neon nightmare Refn weaves.

When Jesse arrives at her first professional modeling shoot with a studio, she is asked to undressed and the lights go off. The photographer then begins to slowly rub body paint all over her with more of Martinez’ trance-worthy music. This slowing down of the story allows the viewer to observe the situation as our mind wanders with worried intentions.

Refn doesn’t shy away from going for the more esoteric and horrific of visuals he is known for. When Jesse first steps onto the runway, we don’t see the runway anymore; we see an occultish symbol that she walks into as she confronts herself in the reflection of triangles. It’s a very evocative scene to portray her descent into evil. Towards the third act, a horror aspect takes over which involves a very Cronenberg-esque ending of blood and gore that is presented with a brooding sense of ugliness.

The Neon Demon is easy enough to write off as being artsy-fartsy for its simplistic acting, slow pacing and favoring of style over substance. But there was just enough style present in how Refn dresses unforgettable shots with challenging imagery I felt to justify his lesser approach to his story. It’s a beautifully dolled-up corpse of a movie that envelops the viewer in its weird and wondrous world of the artificial and immoral. It may be a hypnotic ode to the likes of David Lynch and David Cronenberg, but it mostly worked on me.