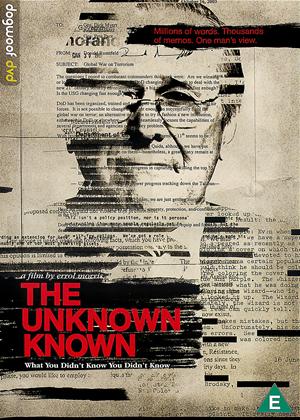 Synopsis:
In 'The Unknown Known', Academy Award-winning director Errol Morris offers a mesmerising portrait of Donald Rumsfeld, the larger-than-life figure who served as George W. Bush's secretary of defense and as the principal architect of the Iraq War. Rather than conducting a conventional interview, Morris has Rumsfeld perform and explain his "snowflakes" - the enormous archive of memos he wrote across almost fifty years in Congress, the White House, in business, and twice at the Pentagon. The memos provide a window into history - not as it actually happened, but as Rumsfeld wants us to see it.
By focusing on the "snowflakes", with their conundrums and their contradictions, Morris takes us where few have ever been - beyond the web of words into the unfamiliar terrain of Rumsfeld's mind. 'The Unknown Known' presents history from the inside out. It shows how the ideas, the fears, and the certainties of one man, written out on paper, transformed America, changed the course of history - and led to war.
Actors:
Donald Rumsfeld
Directors:
Errol Morris
Producers:
Amanda Branson Gill, Robert Fernandez, Errol Morris
Voiced By:
Errol Morris
Writers:
Errol Morris
Studio:
Dogwoof
Genres:
Documentary

Reviews of The Unknown Known

There are some things deep down that we know with certainty but cannot rightly prove and then there are some things that we don’t although we have a suspicion to the fact. The Unknown Known handles both as it tries to get into the mind of a man paid to keep some of the biggest secrets in the world, all under the guise of protecting his country.

The Unknown Known follows Errol Morris as he interviews Donald Rumsfeld, the former US Secretary of Defense about his career in Washington and the many aspects of his life that brought him fame and success. The film tracks Rumsfeld’s career from his early days as a congressman in the 1960s all the way to his influence in the invasion of Iraq in the 2000s.

While watching Rumsfeld talk about his life and his career in such a free yet equally restricted way is fascinating it also takes some getting used to. The film deals in avoidance and half truths as each man tries to gain the upper hand on the other with Morris attempting to find a way to the answers Rumsfeld doesn’t want to give. The two play a game of manipulation and while its terrific to watch it results in half answers and uncertainty.

The film promises answers from a man who has been known for avoiding them but don’t come looking for anything absolute or even concrete, this is a film of understanding a man few ever will and while you come out thinking you understand him you can never really be sure and watching the two playfully avoid talking about Iraq or any part of policy can drag as the expert moves each play against each other begin to bore.