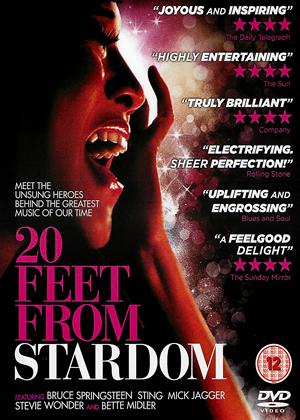 Synopsis:
Millions know their voices, but no one knows their names. In his compelling new film 'Twenty Feet from Stardom', award-winning director Morgan Neville shines a spotlight on the untold true story of the backup singers behind some of the greatest musical legends of the 21st century. Triumphant and heartbreaking in equal measure, the film is both a tribute to the unsung voices who brought shape and style to popular music and a reflection on the conflicts, sacrifices and rewards of a career spent harmonizing with others.
These gifted artists span a range of styles, genres and eras of popular music, but each has a uniquely fascinating and personal story to share of life spent in the shadows of superstardom. Along with rare archival footage and a peerless soundtrack, 'Twenty Feet from Stardom' boasts intimate interviews with Bruce Springsteen, Stevie Wonder, Sheryl Crow, Mick Jagger and Sting to name just a few. However, these world-famous figures take a backseat to the diverse array of backup singers whose lives and stories take center stage in the film.
Actors:
Darlene Love, Merry Clayton, Lisa Fischer, Lou Adler, Stephanie 'Stevvi' Alexander, Patti Austin, Chris Botti, Todd Boyd, Carole Childs, Amy Christian, Greg Clark, Kyliyah Clayton, Susan Collins, Charlotte Crossley, Sheryl Crow, Chris Darrow, Paul Epworth, Tabitha Fair, Jean Thomas, Susaye Greene
Directors:
Morgan Neville
Producers:
Gil Friesen, Morgan Neville, Caitrin Rogers
Writers:
Morgan Neville
Others:
Gil Friesen and Caitrin Rogers
Studio:
Spirit Entertainment Ltd
Genres:
Documentary, Music & Musicals, Special Interest
Awards:

An interesting and entertaining film, about gifted and striving singers who either shunned stardom or were waiting for their chance.

the viewer feels their passion and lives their anecdotes

Designed as a film to look at the underappreciated and the modest in a new and unexpected way, 20 Feet from Stardom revels in its subject matter as it attempts to make their accomplishments, pardon the pun, sing. What emerges isn't so much a glowing endorsement of them as it meshes the bad with the good like any good documentary but it gives audiences an insight into a different time and the men and women who made some classic music possible, even if you might not know their name.

The film follows the story of a group of backup singers and how their voices and styles came to influence and create some of the best music of the last few decades. The film shows their rise through their roles and their failures to rise above their position due to the oddities of the music industry and due to their own actions. The film also looks at the history that follows them and is affected by them along the way.

While the idea of never having a glimpse of fame or fortune can be an oddly terrifying one, 20 Feet tells the story of those that kissed the edge of it but never really stepped in it and it's surprising to see such well rounded, happy people discuss their brush with celebrity, with the moment their lives could have changed. The people making these records deserve credit but to do so is to forget the ones that make it happen.

The stories they recount feel grand and important as these wonderful characters spout off the names of countless famous tracks they helped mould. That being said they never cross over into bragging territory, their tales are contained and enlightening about how the music industry and the artists making music rely upon much more than themselves. In fact the film shows without a shadow of a doubt that plenty of what is important in music or in life is happening just outside the limelight.