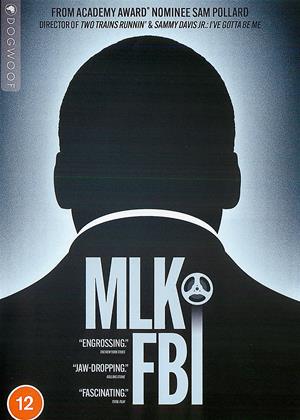 Growing up in the 1950's I was taught about the American Declaration of Independence 'all men are created equal' - Enlightenment values etc. I later spent a lot of time trying to get my head around the fact that the American south had a slave economy. (The architecture of Washington was based on ancient Roman/?Greek styles - also slave economies.) Slavery was (is) brutal and an unspeakable injustice, the effects of which are still being felt by many black people in the USA (and elsewhere). This film really does highlight the legacy of slavery - as MLK said - 'how can you expect people to pull themselves up by their bootstraps, when they don't have boots' - people left with nothing materially, but often a fighting spirit, worthy of great respect, well highlighted in this film.

Still can't get my head around it!

An important story, worth telling - MLK/FBI review by Old Devonian

The 1960s are close to ancient history now but the decade was very important to the social history of the liberal democracies. This documentary nicely deals with one significant character and through the use of contemporaneous tv interview segments and newsreel shows MLK ‘s charisma and contrasts this with the paranoid, white supremacist view of the FBI as an instrument of government. The FBI attempt to taint the civil rights movement with links to communism are clearly shown and ultimately failed.

An enjoyable documentary shedding more light on an important moment in history.

I wonder how MLK would view the state of Black Lives in USA now and feel his death was worth it.

Have you ever heard this conversation before? Person A says that Martin Luther King Jr. was assassinated by the FBI as part of a broad operation to discredit and destroy the civil rights advocate. Person B, eager to downplay any semblance of racism systemic within the American system, says that this is just a hoax, there’s no evidence, and all of that is just a hoax by the liberal media. Person A, having not done much of any research on this topic to update his talking points, merely says “well, maybe you’re right.”

Of course, to prove this assertion, one would have to sort through recently released FBI reports and a number of historical receipts to prove this theory which most have assumed. How can you assume if there is no proof? MLK/FBI is that prove, presenting a host of material that shatters the notion of the FBI’s involvement in defaming Martin Luther King Jr. went far beyond hindering his civil rights marches and protests.

The newly uncovered archival footage of transcripts, audios, and reports of the FBI’s dirty dealings is quite the revelation. Director Sam Pollard attempts to piece it all together into presenting the full story that most schools would rather glaze over. He had mentioned at one point that his producer was astonished at how much new footage had been unearthed for this project. In truth, there seems to be so much to sort through that all of this info starts to become exhausting that one may find themselves struggling to make sense of it all, from both a moral and organizational standpoint.

Yet such a film is absolutely mandatory, especially in this day and age. There’s a tendency to paint history with a broad brush, where Martin Luther King is revered and celebrated as an American hero. His name is often invoked for his forms of protest that were non-violent when wanting to combat modern forms of protest. This ignores the fact that protests are meant to be disruptive and to fight back against the system. King became a cudgel for those who didn’t want to address racist issues that were protested against, as though King was highly effective and wasn’t seen as a massive agitator to the American way of life.

Long story short, King did not take the civil rights movement sitting down and he was absolutely the target of American organizations seeking to take him down. The harassment that King and his family faced seemed to be common knowledge for quite some time but even this aspect was doubted with the 2014 film Selma, where historical accuracy was questioned of the FBI involvement. For any naysayers, let those doubts die with this documentary.

MLK/FBI is sure to be a quintessential classroom picture. It pulls back all the hope and powerful nature of King to show just how tough the struggle was. King’s crusade wasn’t a matter of just saying “I have a dream” and that was that. It was a fight where King had to take on the very way of American life if he ever hoped to reshape it. Keep that in mind the next time you believe protesters are just a nuisance that should be more like MLK.