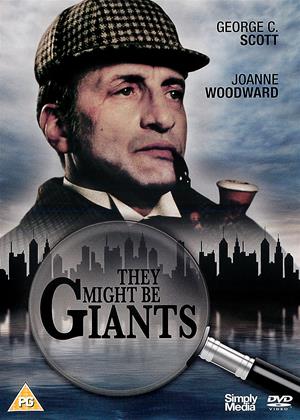 This incredibly odd and very, very made-just-after-the-sixties film is an obscure example of that peculiar movie genre in which people with severe mental illnesses are really saner than everybody else. It also has the unusual distinction, along with "The Big Country", of being less well-known today than the band who named themselves after it.

I can see why it isn't better known. It's very flawed indeed, with a ridiculous number of inadequately explored or completely unresolved subplots, and abrupt mood swings from kooky romance to borderline tragedy with the odd bit of Surrealism. It doesn't seem to be able to make its mind up whether the delusional hero really does have the mental capabilities of Sherlock Holmes or is just a loony in fancy dress talking nonsense. And even though I didn't know until after I'd watched it that it was adapted from a stage play by the play's author, I guessed it probably had been, due to the long stretches of the film in which no scene-changes occur and people tell each other things we should have been shown, and the fact that despite constant talk of past events, there's not one single flashback.

However, in its own way it's oddly compelling. A lot of this is down to the performances of the two leads. Joanne Woodward is good as a middle-aged woman who is believably not all that attractive but definitely not hideous, as opposed to "Hollywood-ugly", meaning marginally less gorgeous than Marilyn Monroe. But George C. Scott is excellent as the only truly complex character, a good man who went mad for reasons we really should have been told far more about. Scott is one of those actors nobody talks about much any more because he wasn't in any true cult movies, but he was an extremely good actor who excelled in playing men who were simultaneously brilliant and damaged - "Patton" is undoubtedly his finest film. This is a much lesser work, but he gives it everything, and really makes you care what happens to him. It's a pity that almost everybody else is a cardboard cutout, and events which couldn't have been effectively portrayed on stage are mostly left out, apart from some mismatched interludes of "it's a movie so here's an irrelevant subplot in which something a bit visual occurs which I wrote specially."

Overall, I'd call this a really interesting failure which redeems itself through some good acting despite the terrible script, and by genuinely trying to be different and make some kind of point, even if I'm not sure what it was supposed to be - good luck trying to figure out what happens at the end! By the way, if you're a big fan of Terry Gilliam, you'll probably want to see this, because "The Fisher King" is pretty close to being a remake.