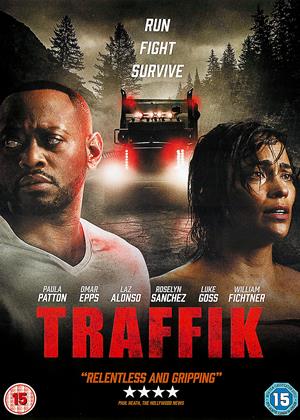 Story which tells of a couple going into the country (looks like the Appalachians) for a break to a friends retreat, unbeknown to the lady (Paula Patton) a satellite phone has been dropped into her handbag and in tow are some angry hairy bikers and not so in regards to Luke Goss (remember him from Bros)? who are all part of a Human trafficking gang wanting the phone back. Violence breaks out, shooting, murder and stabbing and without giving too much of the plot away the ladies are particularly 'wanted'. One or two mild twists ensue but the film is largely cliched with a contrived ending which tends to make you think really!?!... but at least as a journalist (Patton) she get's her news coup, 2.5/5 for me due to the poor end.

There are serious, quality movies about human trafficking out there but this is not one of them. Poorly acted in general, with plot devices notable for their lack of  originality, you can see what is coming a mile off. Don't waste your time. Life is too short.

What has all the initial trademarks of clichéd thriller actually turns out to be more entertaining and interesting. The set up is on the face of it very familiar, young couple go to a remote weekend retreat where they inadvertently become the target for some nasty bad guys and have to defend themselves against the odds. But as this film moves neatly and steadily forwards it takes an interesting direction or two making for a far better film than at first thought. Paula Patton is journalist Brea who is taken to a mountain retreat by her boyfriend, John (Omar Epps) for a romantic weekend where he intends to propose. But a chance encounter with a disturbed woman in a service station restroom leads to a confrontation with a ruthless sex trafficking gang led by Luke Goss. Soon the couple are fighting for their lives. It's in the twists of the plot and the attempt to highlight the scandal of sex trafficking that the film works remarkably well. It's never overly pretentious and the story keeps you entertained throughout. Well worth checking out.

I’m sure the best of intentions came with the conception of Traffik, trying to make some point the illegal and immoral act of sex trafficking across the world. I say this only because the script is so unbelievably baffling as a thriller pulling twists and violence out of its butt seems more dignified if it makes some point at the end. After all, the filmmakers wouldn’t just use this real-life atrocity as an excuse for a dopey tale of terror most ludicrous, right?

The story involves the couple of Brea and John who are on the verge of getting married. To seal the deal, John takes Brea on a romantic getaway to a little place in the mountains. And by little place I mean one of the most lavish, spacious, and absurdly decadent displays for a vacation home. This place not only has enough space for two families with its expansive living room and kitchen but also features a massive bordering pool that perfectly showcases the mountains. And you better believe that Brea and John will make out at such a location with a soundtrack and editing worthy of a music video.

But the vacation quickly turns terrible and it’s not just because their friends showed up to spoil the mood. Brea has apparently come across the smartphone of a trafficker of women, discovering pictures of abused women in the photo gallery. When one of the girls comes to retrieve the phone, she brings the whole gun-toting posse with her, showing they mean business by gunning down their property. Soon, Brea and John are on the run through the woods as they try to avoid the bad people with guns who want to take them out for knowing too much.

Traffik proceeds down a rather dopey and familiar assembly of a slasher thriller. Brea will find a home of a local and believe she is safe until a shotgun blast at the door says otherwise. She’ll try to hide in a car and look up from the space under the dashboard to see nobody, only for the killer to turn up behind her. Even the police can’t be trusted in a not-at-all surprising twist when we see one cop shoot the wrong people intentionally. It’s all such a ludicrous concoction that I’m surprised the gas station attendant wasn’t in on the trafficking as well. I can only assume either the absurdity had reached its limit or the running time was getting too long.

Yes, human trafficking is about a serious and real-world issue but, wow, does it come off terrible in trying to make a point. Easily the most laughable and uncomfortable moment features a showdown between Brea and a trafficker where the corrupted individual holding the gun gives a long-winded speech about how trafficking is just a part of life, equating the selling women to the labor of sweatshops. Yikes. But any real-world relation seems ripped out of the room when the villains are apprehended by a handful of cop cars and a helicopter that zoom in to arrest one person accused of tracking. Uh-huh. I suppose the end credit sequence of featuring a country road upside down was probably meant to represent the underworld of day-to-day life that goes unseen but all it does is create a very topsy turvy view of the subject that deserves more than a sloppy thriller.