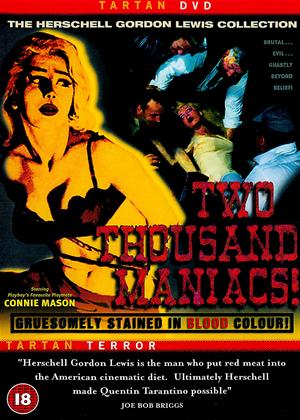 This (very) loose remake of "Brigadoon" is the second part of Herschell Gordon Lewis' legendary "Blood Trilogy", generally regarded as the first ever splatter movies. Unfortunately, the "legendary" aspect of these films is about 90% connected with the first one, "Blood Feast", which, with its ground-breaking copious, explicit, and of course hopelessly unconvincing gore, combined with woeful acting and non-existent production values, truly is a sight to behold!

"2000 Maniacs", which, by the way, never manages to give the impression that there are more than about 100 maniacs at the very most present in a few of the crowd scenes, features the same lead "actress" as "Blood Feast", Connie Mason, Playboy's June 1963 Playmate Of The Month, whose subsequent acting career peaked with uncredited walk-ons in "Diamonds Are Forever" and "The Godfather Part II", but is otherwise fairly competently made for most of its length (apart from the sound, which in some scenes is so bad it's hard to make out the dialogue), and thus not as funny, even though, unlike "Blood Feast", it's intentionally pitched as a black comedy. The problem is that the sole joke - an entire town full of yee-hah good ol' boys gleefully murder complete strangers in horrendous ways for an utterly bizarre reason - gets a bit tired long before the film has run its course.

The other problem is that, having gotten away with outrageous if unrealistic gore in "Blood Feast", HGL couldn't take the censors by surprise again, so the actual gore he's famous for is in extremely short supply, though there is at least somewhat more of it than in the tedious final third of the trilogy, "Color Me Blood Red". The basic idea is promising, but the comedy mostly doesn't work, there's zero suspense (no prizes for guessing almost immediately who will survive and who won't), and as horror films go, it hasn't really got very much horror. "The Texas Chainsaw Massacre" has a surprisingly similar plot, the same number of on-screen murders, even less explicit gore, and, taking account of inflation, a lower budget, but it's a thousand times more effective. Still, it's hard not to sort of like a film as unabashedly cheesy as this, even if no-one in their right mind would claim it's actually any good.

Fun fact: the Florida location where it was shot ended up as part of Disney World.

The disc also had Lewis's next film 'Moonshine Mountain' on it which I found boring.