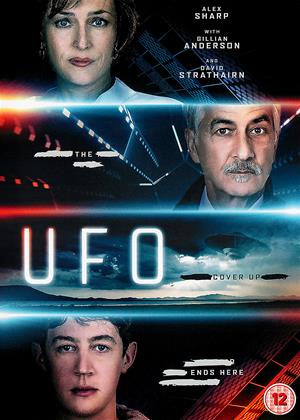 A film with a difference - UFO review by EMJAY

I was expecting to see a second rate sci-fi film but I was more than pleasantly surprised. It's a well made film, purely fictional, about a young college student who gets hooked on an occurence at an airport. The kid, being an expert maths sudent notices some anomalies between the reported facts and mathematical equations. I won't go further as I don't want to make any spoilers. Let it suffice to say that I am a hard task master and 95% of the films are, I'd like to say rubbish, but certainly they insult my intelligence. This one had me hooked that it ended far to swiftly. It's 85 minutes, almost an hour and a half, but it just flew away. Well worth a watch.

Usually a sci fi film with a relatively young lead means it will show itself to be a shallow as a summer puddle. On the contrary here, it's really quite cerebral although the complete absence of any action scenes might leave some disappointed. For me though, it was interesting and refreshingly different from the usual Hollywood dross.

The act of discovering a UFO in a movie doesn’t sound as tantalizing these days. It even sounds downright goofy for the premise conjuring up the silly sci-fi drive-in pictures of the 1950s. The good news is that this little film, UFO, doesn’t go for the easy goofiness of the genre about discovering aliens. There’s no silly creatures and no bizarre plan of aliens coming to our planet to eat our brains. Rather, the film proceeds in the opposite direction, so committed to doing its homework on staging a more believable UFO cover-up that it forgets to take its head up from the mathematical workings to notice there’s very little character.

The story concerns Derek, a college student who swears he saw an unidentified flying object as a kid. And then something similar pops up at his local airport; a UFO that stuns a shocked crowd at the terminal. The FBI jumps on the scene and quickly explains away the incident as that of an intruding drone. But was it? Derek doesn’t believe the news or even the team investigating this strange occurrence. And he aims to prove this knowledge of the unknown through math. Lots of math. So much math that unless you’re fully engrained in your university course, a lot of this script is going to go whizzing by your head faster than a flying saucer from public examination.

The most surprising thing about this picture is that talent involved. David Strathairn pops up as an FBI agent who quickly calls the shot when he jumps into the airport and starts demanding conference rooms for questioning and answers from his scientists. His scientists don’t turn up much and he’s shocked that someone like Derek would be intuitive and experienced enough to expand on the specifics of the UFO’s appearance. Also starring in the picture is Gillian Anderson in a sci-fi role far separated from her days on the X-Files. This is more like a script that’d be in the dumpster of the X-Files writers room for being too long and boring. Anderson has so little to do as a university professor that she spends all of the film delivering lines with a low voice and most of it while in a robe.

The very premise of UFO isn’t a bad one. It could actually be engaging for how little it favors its limited special effects and tries to weave a competent investigation around this mysterious flying object in the skies. But the film is so muddled in the specifics I didn’t really feel much for Derek as his personal journey of closure doesn’t feel as founded, stuck with his head in the clouds of making sure all the numbers add up. Now I’m not saying you need a truckload of special effects to make this type of drama exciting, as I’m sure a lot of viewers have already commented that this is a film called with UFO with not too many shots of UFOs. But we do have to be invested in this procedural past how well these characters know what they’re talking about when it comes to uncovering the truth.

UFO certainly has a lot of smarts but it doesn’t have much heart or greater message past the comforting realization that we are not alone in the universe.