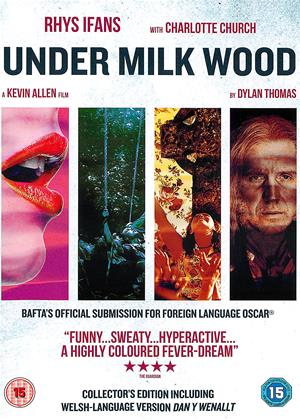 Reviews (2) of Under Milk Wood

Needlessly over the top styling - Under Milk Wood review by TH

This could have been a brilliant sexy, brooding and quirky film. As it stands it is simply a crazed, inaccessible, headache-inducing 'romp' through the Dylan Thomas verse; admitedly probably exactly as the man himself would have intended and mirroring his state of mind, but not easy to view as a simple piece of entertainment - I guess that may be the precise point of it but art can get to a point where it is too self-indulgent on the behalf of those that produced it and what is the point of that?

Dylan Thomas wrote "Under Milk Wood" in 1953 because the BBC commissioned it as a radio play, and it was subtitled "a play for voices". A few years later, when TV had become the dominant broadcasting medium, he might have written a revised version with that in mind, but as it stands it's very clearly intended to be a work you listen to rather than watch. And since Thomas died a month after completing it, this is the only version we've got.

The main difficulty with adapting it for film is that we're constantly hearing the voice of a narrator describing things, many of which are extremely trivial. Mental pictures of events rather than actual visuals are such a fundamental aspect of the narrative that the most important character, who perceives a great deal of what happens, is blind. So seeing them as well tends to be a bit redundant, especially if the entire point of the scene is a poetic description of somebody putting the kettle on.

The 1971 film version with Richard Burton had similar problems, which is presumably why it was 44 years before anybody tried again. This conspicuously cheaper adaptation oscillates between over-literal depictions of trivial incidents, semi-abstract close-ups of random objects (the director seems to be obsessed with water, especially that bit of stock footage with the purple jellyfish), overacted and usually inappropriate comedy, and gimmicky visual effects, including far too many shots from the point of view of the blind character, who in this version isn't completely blind but has very blurred eyesight. And when all else fails, random weirdness, such as four Maoris in grass skirts performing a haka for no reason at all. In the sea.

In other words, it's arty, and not in a good way - it doesn't help that the first half-hour consists entirely of dream-sequences. At times it resembles the Beatles' "Magical Mystery Tour", which can never be a good thing! There's also a lot of mostly thankfully brief sexual imagery of a crude, often downright repellent kind, which takes Dylan Thomas's basic idea that in a society which disapproved strongly of almost all forms of human sexuality (remember, this is 1950s Britain), people still did that sort of thing because people always do and there's nothing wrong with it, and uses it for cheap laughs.

This pretentious, self-indulgent film doesn't really serve any useful purpose. If you want a far better idea of what "Under Milk Wood" is meant to look like, obtain a copy of the 1954 BBC radio broadcast and listen to it with your eyes shut.