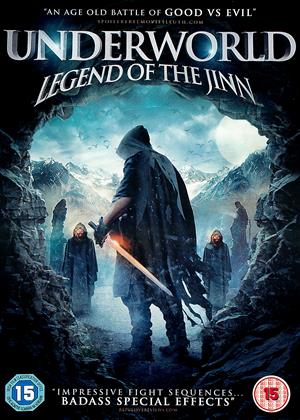 Rent other films like Underworld: Legend of the Jinn

Reviews of Underworld: Legend of the Jinn

Underworld: Legend of the Jinn (aka Jinn) review by Mark McPherson - Cinema Paradiso

Those pesky devils in magma-striped ash skin are back again and it’s up to another chosen few to stop them. You can be sure to expect some holy battles of good versus evil, angels versus demons, holy incantation versus satanic babble, blah versus blah and so on. Creating these action fantasy pictures involving the lore of angels and demons is a fairly big risk as they often descend into been-there-done-that-a-million-times-over territory. Jinn is another notch to the wall, though it is mildly amusing in how it ridiculously tries to insert some thrills into this mess.

The jinn are nothing new as far as ethereal monsters go. The once fire-based rulers of the Earth, the jinn now exist in smaller numbers as the angels attempt to snuff them out in the presence of man. Some bearded man resembling Jesus takes the fight to one jinn in 1901 India. He enters a shack where our demon appears more like he’s ready for a heavy metal concert than destroying humanity. With his terribly assembled mummy figure and long-haired wig, the jinn succeeds in placing a curse on our undisclosed Jesus clone despite being armed with a blessed arsenal. His future bloodlines will be tormented by the jinn from birth, but that apparently didn’t stop his family from expanding. You’d think one part of the family tree battling the jinn would mention to the relatives that they should adopt instead of having another kid.

Now the film jumps to present day Michigan where Shawn (Dominic Rains) must prepare for battle. He doesn’t learn of these jinn until he’s fully-grown and expecting a child when Shawn finally discovers a tape from his dead father explaining the curse. How long has he been putting off watching a VHS tape from his late father? Either his dad is stuck in the past or Shawn is the laziest character in this film. He’s kicking himself for placing the tape so low on his to-do list that it’s now too late. The fun has already begun for the jinn who decide to prank Shawn by moving the furniture in his house and capturing his wife just as they are about to kiss. This movie would have been a great comedy if the whole curse of the jinn were just stupid little pranks like stealing Shawn’s mail or slapping sandwiches out of his hands.

Aiding Shawn in the quest for his wife are the magical kung-fu warrior Gabriel, the sword-wielding priest Father Westhoff and the warrior-gone-insane Ali Amin. They train Shawn, put him through the special tests, equip him with holy weapons and we’re off to the bland races of action. The motions the movie goes through are rather hilarious in how they’re presented. Shawn’s career is that of a car designer so, of course, he has to show off his rad looking sports car. How does he show it off when battling these evil creatures? I kid you not, Shawn actually uses his car to outrun a smoke monster. His car is pretty darn fast so you can rest easy around him if The Fog or The Mist decide to attack.

For as ridiculous an effect as that scene featured, most of the creature and makeup effects are not too shabby. The more we see of the jinn throughout the picture, the better they look as magma-based beings that smoke when doused with holy water. The jinn open up portals to lead their armies against Shawn. But when Shawn kills a jinn messenger who warns him to give up, the jinn merely leave knowing they’re beat. Wouldn’t want to waste all those computer graphics on a fight scene where we know the ending.

Jinn makes an earnest attempt at trying to be an angels versus demons action film, but writer/director Ajmal Zaheer Ahmad narrowly misses the mark with this mythological material. He seems to be intentionally hamming it up to feature priests swinging swords and Dominic Rains showing off his abs in gratuitous shots. It seems as though everyone involved had a fun time with this production, but that enjoyment doesn’t quite transfer over to the audience. They will be bombarded with overlong rules and exposition for what essentially amounts to run-of-the-mill hocus pocus tactics for battling evil monsters. Something so simple as Jinn could use more levity rather than take itself so seriously. Can Shawn not laugh at the fact that his car outruns a smoke monster?