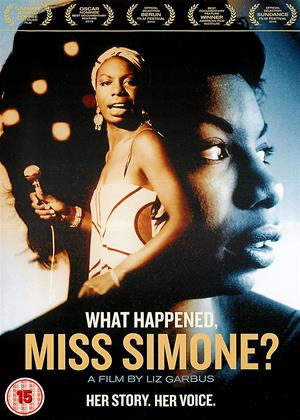 Synopsis:
"What Happened, Miss Simone?" is the story of Nina Simone's life and career. Through archival interviews, extensive performance footage, and new interviews with family, friends, and colleagues, it paints a fascinating portrait of this complex and challenging artist. Nina Simone was many things: pianist, singer, songwriter, performer, civil rights campaigner, wife and mother, victim of abuse and black icon. Growing up in the segregated American South, she began to learn piano at age 4, attended the Juilliard School of Music in New York and aspired to a career as a concert pianist.
Believing she was denied admission to the Curtis Institute because of her race, she began to play in nightclubs to earn money and her career as a jazz and blues performer was born. The film follows Nina Simone through the sixties and her intense involvement in the civil rights movement, her decision to relocate to first Africa and then Europe in the early seventies, her emotional difficulties in the eighties and her later years in France in the nineties. "What Happened, Miss Simone?" is a captivating film about an extraordinary and influential artist who will continue to be revered for generations to come.
Actors:
James Baldwin, Stokely Carmichael, Walter Cronkite, Stanley Crouch, Gerrit De Bruin, Dick Gregory, Hugh M. Hefner, Elisabeth Henry-Macari, Lisa Simone Kelly, Martin Luther King, Al Schackman, Attallah Shabazz, Ilyasah Shabazz, Nina Simone, Andrew Stroud, Malcolm X
Directors:
Liz Garbus
Producers:
Liz Garbus, Amy Hobby, Jayson Jackson, Justin Wilkes
Others:
Justin Wilkes, Amy Hobby
Aka:
Untitled Nina Simone Film
Studio:
Eagle Vision
Genres:
Classics, Documentary, Music & Musicals, Special Interest

Reviews (1) of What Happened, Miss Simone?

Fascinating documentary on a troubled musician - What Happened, Miss Simone? review by PV

The first thing to note about this is that Nina Simone's daughter and estate was involved in making it - so there is no mention of her arrest a couple of years before her death (for shooting a pistol at local kids who were scrumping apples from a tea in her garden in the south of France).

No mention either of her view, shaped by racist black power activicts, that there should be a black-only state in the USA where whites were banned.

It's fair to say really that the glory days of Nina Simone (born Eunice Waymon) were in the 50s and early 60s. By the late 60s she was taken advantage of by black power activists who filled her head with racist and violent nonsense, and bucketfuls of Mao-ist Marxist dogma. So instead of playing great music, she ranted at audiences with parroted slogans.

Like many a great musician, she then fell on hard times - and the redemption of her later comeback years are eye-opening, if sad.

So, not perfect. But Nina Simone is the piano player's piano player - the favourite musician of so many other musicians.

Her story is one of racial segregation in the USA from both racist blacks and racist whites - so, in that, the division seems just as much, if not more, today.

A must-see for musicians.