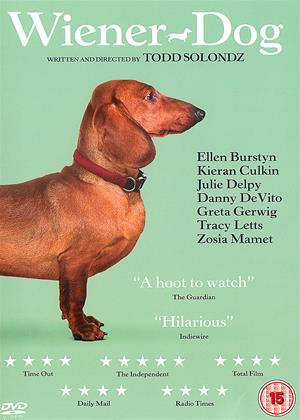 I am watching and want it to finish.

What a really annoying movie.

No likeable characters at all.

Is this the guy who did 'In the Bedroom'. Thought that was overrated too. Not a fan.

I was keen to see this as it looked really quirky and has Danny de Vito but I pretty much turned it off before he appeared, it is supposed to be a black comedy Indie film but just fails massively - avoid!

Pretentious, depressing, pointless, dull, and not a tad bit funny – Wiener-Dog is an exercise in human persistence that goes something like this: the more you can force yourself to watch it, the less likely it is you’ll yell over someone taking your turn at supermarkets in a span of your lifetime. Wiener-Dog has some redeeming qualities, and most of them lay splattered somewhere across the movie’s painfully long runtime, with no respect to its audience or anyone involved in the project for that matter. Would Wiener-Dog become a cult classic? Short answer is: no. Long answer is: not in a million years.

I personally dislike throwing the word “pretentious” around in a barrage of poorly constructed strings of words and numbers that have little to no semantic value whatsoever. That said, Wiener-Dog is the closest thing to something being pretentious, and oh boy does it live up to its pretentious potential.

First off, the whole ordeal feels like director Todd Solondz guided his actors to channel the most hipster-y faces possible. The results: a bunch of people, including but not limited to Julie Delpy, Kieran Culkin, Danny DeVito and Tracy Letts, staring off camera in a gaze that one would think contains the sole essence of achieving human immortality. It remains to be seen whether or not this is the case, with me betting my hard-earned greens that it’s most likely not.

Also, can we take a moment and bash away at the misleading trailers everyone seems to enjoy producing nowadays? It’s simple: take few important elements of your plot without spoiling the flick, and present them in such a manner that would help the viewer get a better grasp of why he should spend his money watching it, instead of going bowling, or drinking an overpriced Starbucks coffee.

Sadly, Wiener-Dog irrevocably fails this simple test, and continues to mislead worldwide audiences to this day.

Next, it’s unclear whether the ‘dog’ is a ‘smart’ metaphor for the good and bad in life, or just represents a dog without any precedents whatsoever. Wiener-Dog fails in both cases: as a metaphor and as a pet-movie. Either that, or I’ve went bad in my mind and cannot understand modern art anymore.

When I come to better think of it, Wiener-Dog insults everyone without even trying – mostly basic human intelligence. It contains unapologetic scenes of unprecedented verbal abuse toward gravely ill patients, people with disabilities and what not. I mean, I’m all for open societies and freedom of speech, granted it serves a purpose. The abominable glossary used in Wiener-Dog didn’t, so there you have it.

Wiener-Dog, the latest artsy-schmartsy film no one wanted, neither cared for, neither will care in the foreseeable future. Avoid like the plague.