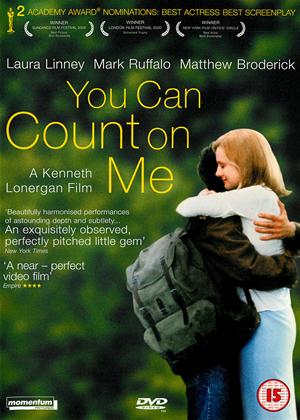 Rent other films like You Can Count on Me

Reviews (6) of You Can Count on Me

'You Can Count On Me' is a modestly produced but potent drama about two siblings, who after the death of their parents in a car crash as children, become two very different adults who lead two very different lives. Sammy (Laura Linney) is a conservative, controlling, perfectionist single mum who manages to balance her job at a bank with raising her 8 year old son. Everything in her life is balanced and organised, until a new boss is appointed at the bank, and her wayward, reckless, drifter brother Terry (Mark Ruffalo) arrives in town with little more than the clothes on his back and loose change in his pockets. Moving back into what was the family home, the story revolves around the friendship that blooms between Terry and his 8 year old nephew and the fragile relationship that often exists between siblings. 'You Can Count On Me' is a perfect example of drama at its best. There are no special effects, no over the top showy performances that beg for an Oscar, and the viewer isn't bashed over the head with a preachy message. Unlike most dramas, it respects your intelligence and is confident enough to remain subtle in tone, knowing that the strength of the story and characters will keep you hooked. All in all, 'You Can Count On Me' is a great 'slice of life' tale of a sister and brother, and their sometimes troublesome but ultimately always loving relationship.

16 out of 19 members found this review helpful.

Intelligent/endearing domestic melodrama. - You Can Count on Me review by Steve Mason

4real family entropy, sugared by an extraordinarily moving ending. Outstanding acting throughout. Merit of not sourcing your script from a comic, very evident here.

Compelling drama - You Can Count on Me review by CP Customer

Laura Linney and Mark Ruffalo are excellent as brother and sister; she is Sammy, the serious hard-working one trying to bring up her son alone and he is Terry, a free spirit who pleases himself and does what ever he wants, when he wants. When Terry comes to stay, Sammy's life and that of her son, Rudy, are turned upside down as Terry teaches him lots of bad habits. The exploration of brother sister relationships is very well done and it is both touching and funny.

A couple die in a car crash and leave 2 kids to fend for themselves - fast-forward many years and you have the reliable, still-at-home, mum of one Sammy (the ever-excellent Linney) and the emotionally-tipsy drifter brother Terry (Ruffalo).

The film takes place over a short period during which Terry comes to town after a long time away, and Sammy goes through some rather hilarious & fraught personal entanglements.

Pleasant, yet in danger of feeling very slight overall without being in tune with at least one of the main characters, a bit of a mood piece too. Very nicely written and paced, and a bit forgettable.

The track used for the end credits is Pilgrim by Steve Earle and Del McCoury. A fitting title to end on.

Kenneth Lonergan has a talent for writing and directing simple films about little, but capturing everyday life in a way that leaves you wanting for more. I would not want to know the storyline beforehand (note the spoilers above) but it doesn't matter as the acting is brilliant and you are soon immersed in small town life in upstate New York.

Having watched and been hooked by Manchester in the Sea, I just had to check out his earlier films. Real life has it's challenges and some fun times. Almost a European film in style, but definitely small town America at it's best.

Surprisingly excellent film - You Can Count on Me review by GEH

I can't remember why I chose this DVD but it was a a very pleasant surprise both my wife and myself thoroughly enjoyed this family drama which was very much like an Anne Tyler novel and was one of the best films we've seen for ages.

Why was it so compelling? hard to say really, there was certainly excellent acting from the two leads Laura Linney and Mark Ruffalo playing two flawed but nevertheless likeable characters and a wonderful script that told its admittedly limited story with great charm and was totally believable from beginning to end. Good supporting cast featuring Matthew Broderick and also the young Rory Culkin who was very watchable without being cheesy or cloying. Like in Kenneth Lonergan's 'Manchester by the Sea' this film also contains a cataclysmic event but in this film that event occurs at the very beginning of the film and we are left wondering of its effects on the two principals as the film unfolds. Also like 'Manchester by the Sea' the story is told via a series everyday minor domestic episodes with the implication being that life goes on...