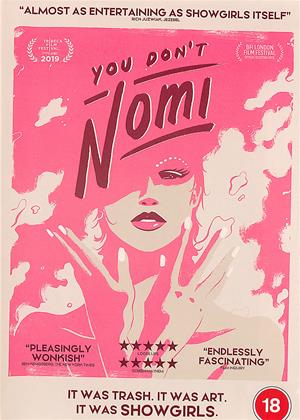 Showgirls might still be rubbish, but something good came out of it - You Don't Nomi review by JB

It's been a while since I've seen the subject of this documentary: the infamously poorly reviewed, 90s smut-athon movie Showgirls. But I don't think that matters: You Don't Nomi is still a wildly entertaining polyphonic loveletter to cinema… good and bad.

You Don't Nomi puts Showgirls in its original context: in its director Paul Verhoeven and star Elizabeth Berkeley's careers, where it sits in 90s US studio cinema and in film culture at the time. But it also explores the weird afterlife of Showgirls including its cult status as, depending who you ask, a misunderstood masterpiece or inadvertent camp classic in the vein of Mommy Dearest and Valley of the Dolls. And it's all told by numerous critics, writers, academics and drag queens.

You Don't Nomi has got this kinetic, creative energy with its editing of clips from Showgirls and other Verhoeven films. The result is often really funny (the compilation of women vomiting everywhere from various Verhoeven's films encapsulates a central question: is this film just gross or is there deeper, hilariously bizarre transgressive themes?). You Don't Nomi also has this tumbling rabbit hole quality with obsessive fans relaying multiple readings of Showgirls … is it misogynistic, deeply problematic exploitation? Is it empowering to some gay men and some straight women? Or, in the words of one commentator… is it "like it's been written by a brain-dead Harold Pinter"?

I still think Showgirls is deeply awful but this pleasingly raucous, playful, intelligent and sometimes moving documentary almost makes me want to watch it again, just to be sure.

There's a big difference between Trash and Rubbish.

Showgirls was the product of two egotistical misogynists high on power, drugs and self importance.

Now here comes this pathetic attempt to redeem this car crash that does very little convince.

The proof is in the pudding as in the director, scriptwriter and star did nothing of any value after the release of this travesty.

If you hated Showgirls avoid this pathetic attempt at a retrospective puff piece at all costs.