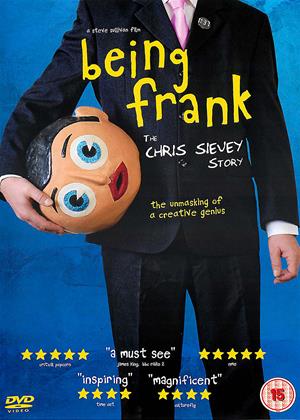 Reviews (2) of Being Frank

I would recommend the movie FRANK - a truly weird drama set in the music business and supposedly based on Jon Ronson's time in Frank Sidebottom's (Chris Sievey's) band.

I must admit, I find Frank Sidebottom about as funny as piles, and when I first saw him on The Tube, I think, in the late 80s, I thought he was totally unfunny too.

I notice all commentators here are northern and often from Manchester, so maybe if you're from there, you'll get it - I don't. Same as with Coronation St and so many other things northerners seem to find funny (eg Vic and Bob).

I find 'professional northerners' such as Mark Radcliffe (who speaks here) and Andrew Collins totally tedious. But I agree with Johnny Vegas that it's great when artists have a go, don't aim for X factor stardom, but JUST DO IT and make music, art etc. Though that may come at a cost, personal as well as financial.

Funded by BFI and other state funders - and much like the film doc on perpetual failure John Otway, it's all about the sad life of an attention-seeker.

Fact is, the man who played Frank Sidebottom - Chris Sievey - was not funny and not a particularly good songwriter., yet he kept going. For that he ended up a bankrupt alcoholic dead in his 50s from cancer with a broken family behind him. This is a film about obsession, really.

Sad to see at the end that 2 contributors died since filming - incl Sievey's youngest son Harrison who died aged 24 on his bike in a road accident in 2017.

0 out of 8 members found this review helpful.

Funny, poignant and thought provoking - Being Frank review by AF

Having seen the film 'Frank', which uses the Frank Sidebottom character solely as a starting point, I was interested to see this biopic. I had low expectations. The film tells the Chris Sievey story, and benefits from the fact that he videoed his exploits from his early 20's and left a massive archive of drawings and notes. Chris formed several bands including the Freshies which although competent, were doomed by various external forces to failure, including a strike at the BBC which lost them a Top of the Pops performance. He then invented Frank Sidebottom, which took over as an alter-ego. The rest is history...

This excellent documentary was partly funded by a Kickstarter campaign. It's very well put together, and includes interviews will lots of odd balls who add to the colour of the whole experience. Whether you find Frank Sidebottom funny or not is irrelevant; it's the sheer intensity of effort that Chris Sievey went about his life that sticks with you. A really enjoyable experience.

PS I only watched one 'extra'; Frank Sidebottom on How to keep pets, which really was hilarious.